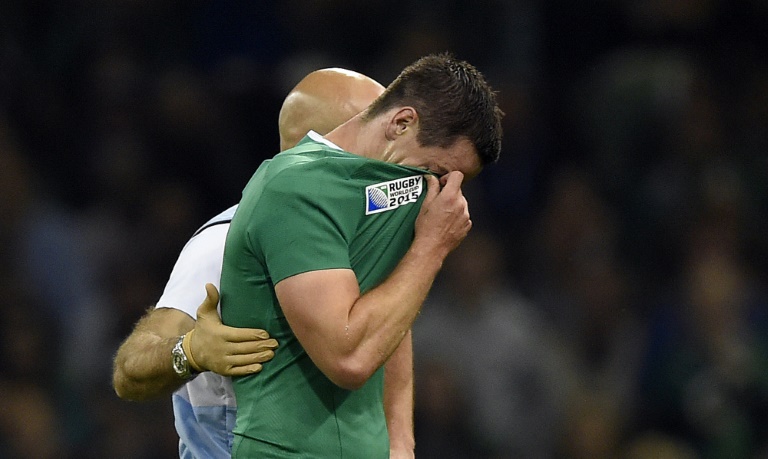 Ireland fly-half Johnny Sexton will not play in Sunday’s World Cup quarter-final against Argentina after his groin injury flared up again, the IRFU revealed.

The 30-year-old — who went off with the injury in the first-half of the 24-9 victory over France last Sunday — will be replaced in the starting XV by Ian Madigan, who performed well when he came on against the French.

Paddy Jackson, the third choice fly-half, moves onto the replacements’ bench while the Irish have also called up Isaac Boss as cover at scrum-half, a position in which Madigan also plays.

“It was therefore felt that it was better to withdraw him from the game rather than risk further injury.”

Sexton’s withdrawal caps a frenetic week for the Irish that saw captain Paul O’Connell and flanker Peter O’Mahony ruled out of the tournament through injuries sustained in the France game. Star flanker Sean O’Brien was then suspended for one game for violent play.

No 8 Jamie Heaslip, captaining the side in the absence of O’Connell, described the news as a “massive” blow, but said he had every confidence in Madigan stepping up.

“They’re all guys you’d like to have in your squad but that’s the nature of the game,” Heaslip said in reference to Sexton, O’Connell, O’Mahony and centre Jared Payne.

“It doesn’t change the gameplan at all.

“You saw last week, after Johnny came off after 25 minutes, Ian stepped right in and did a great job.

“It’s another chance for him (Madigan) to step up to the mark.”

Heaslip added: “It’s not ideal but it is what it is. We focus more on the strength of the collective and never really talk about individuals as such.

“Granted, Johnny’s probably one of the best outhalves out there… but Ian’s no slouch.”

Injuries, Heaslip — who plays with Madigan at Irish province Leinster — said, were “part of the game and we plan for that”.

Assistant coach Simon Easterby described Madigan as a “confident player” who was kicking very well both out of hand and off the tee.

“He’s one of these guys who thrive on that environment as we saw last weekend,” the former Llanelli and Ireland flanker said.

The New Zealand-born Boss, 35 and capped 23 times since making his Test debut in 2006, was originally left out of the squad because Ireland coach Joe Schmidt considered that Madigan was an able enough player at scrum-half to cover there.

However, they have decided they have enough cover for the centre position left vacant by the tournament-ending foot injury to Payne to not call up the likes of last year’s player of the year Andrew Trimble.

“With Ian Madigan now starting tomorrow’s match versus Argentina it’s ideal for him to focus fully on the out-half position,” said the IRFU in a statement.