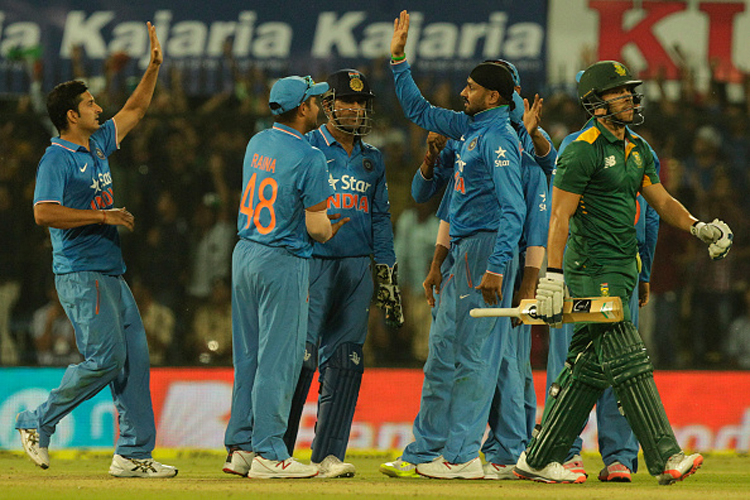 High on confidence after levelling the series, a resurgent India will look to capitalise on their return to winning ways when they take on the formidable South Africa in the crucial third ODI cricket match here tomorrow.

The splendid 22-run victory in Indore on October 14 was a shot-in-the-arm for not only the team but also under-fire captain Mahendra Singh Dhoni after they lost the series opener at Green Park.

The Ranchi star, whose very place in the eleven has been questioned by some former cricketers, answered his critics with match-winning 92 not out, his 16th fifty as captain, which pulled the squad out of a rut and placed it with a fighting total in hand.

Dhoni’s pyrotechnics, by rolling back the years to be at his pristine best, was backed up by some excellent spin bowling by Axar Patel and Harbhajan Singh, who was drafted into the squad as cover for the injured Ravichandran Ashwin.

The confidence of the Indians would have been uplifted by this come-from-behind victory after they were struggling at 124 for 6 around the 30-over mark before posting a challenging score of 247, thanks in the main to Dhoni’s blazing 86-ball knock that contained 4 sixes and 7 fours.

Dhoni not only shone with the bat in his inimitable style but also utilised his bowlers well as his preferred ODI line-up in home conditions appears to be a left-arm spinner and off-spinner at the cost of leg spinner Amit Mishra who had bowled well in India’s 5-run loss in the first match, but was omitted for the second game of the series.

The victory in Indore helped India halt South Africa’s three-match winning run on their tour, the visitors’ other two victories having come in the best-of-three T20 series held prior to the ODI contest.

However, Dhoni and his men would be wary of dropping their guard against this strong South Africa side in tomorrow’s game which is crucial as the winners would hold a distinct psychological edge ahead of the penultimate game four in Chennai on October 22.

While Dhoni’s return to his clinically finishing best is a big plus for the team, the lack of runs from the blade of his successor as Test captain, Virat Kohli, as also of two other key members — Suresh Raina and Shikhar Dhawan — could be a bit worrying for the hosts.