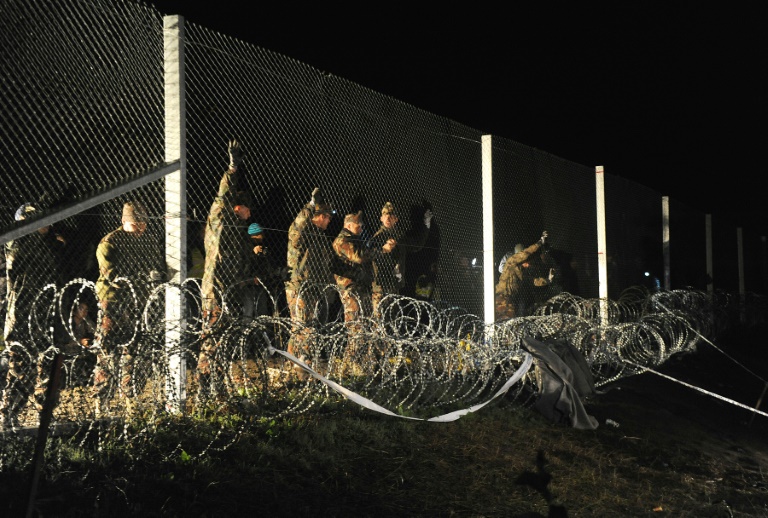 Hungary closed its border with Croatia to migrants early Saturday in a bid to block the path of streams of refugees desperate to get to northern Europe, while a much-hyped EU deal to stem the crisis looked shaky.

After the last 1,500 or so migrants to arrive by train on the Croatian side trudged silently through mud over the informal Zakany crossing, Hungarian police and soldiers sealed it with barbed wire shortly before 1:00am (2300 GMT Friday), said AFP reporters at the scene.

“Closure!” shouted a soldier after the last weary travellers had passed through slowly in single file, some of them carrying an elderly woman in a wheelchair and children’s buggies.

“The ‘green border’ has been closed (to economic migrants) but you can still cross the border legally and seek asylum,” government spokesman Zoltan Kovacs told AFP.

The two official border posts of Beremend and Letenje remain open for those with valid papers.

Earlier Friday, Croatia said it would begin diverting migrants on its territory to Slovenia after Hungary announced it would close the border — a key crossing point on the travellers’ route since Budapest sealed its frontier with Serbia in mid-September.

Most migrants — many of them fleeing conflict or poverty in the Middle East, Africa and Asia — are trying to get to Germany, Europe’s economic powerhouse, which has said it expects up to one million asylum seekers this year.

Hungary’s shut-down came as an EU deal with Turkey to stem the flow of migrants looked precarious, after Ankara said Brussels had offered too little money and mocked Europe’s efforts to tackle the refugee crisis.

Just hours after the European Union announced the accord with great fanfare at a leaders’ summit, Ankara said the plan to defuse a crisis that has seen some 600,000 mostly Syrian migrants enter the EU this year was just a draft.

In the latest in a series of jabs at Europe over the crisis, Turkish President Recep Tayyip Erdogan ridiculed the bloc’s efforts to help Syrian refugees.

“They announce they’ll take in 30,000 to 40,000 refugees and then they are nominated for the Nobel for that. We are hosting two and a half million refugees but nobody cares,” Erdogan said.

“They keep saying ‘We can’t do without Turkey.’ It’s very clear but they are not being clear. Then why don’t you let Turkey in the EU?” he asked.

His Foreign Minister Feridun Sinirlioglu heaped scorn on the EU’s proposals of financial help, calling the offer “unacceptable” and saying his country needed at least three billion euros ($3.4 bn) in the first year of the deal.

Under the tentative agreement, Turkey had agreed to tackle people smugglers, cooperate with EU border authorities and put a brake on refugees fleeing the Syrian conflict from crossing by sea to Europe.

In exchange, European leaders agreed to speed up easing visa restrictions on Turkish citizens travelling to Europe and give Ankara more funds to tackle the problem.

While they did not specify how much they would give Ankara, they did say the three billion euros demanded by Turkey would be a problem.

While the summit was underway, the volatile situation on the EU’s frontier with Turkey exploded into violence with the fatal shooting of an Afghan refugee crossing the border from Turkey to Bulgaria, which the UN refugee agency said was the first of its kind.

The victim was among a group of 54 migrants spotted by a patrol near the southeastern town of Sredets close to the Turkish border and was wounded by a ricochet after border guards fired warning shots into the air, officials said.

The migrants were not armed but they did not obey a police order to stop and put up resistance, they said.

Bulgarian President Rosen Plevneliev said he “deeply regrets” the shooting but said it showed the need for “rapid common European measures to tackle the roots of the crisis”.

The death adds to the toll of more than 3,000 migrants who have died while trying to get to Europe this year, most of them drowning in the Mediterranean.

Interpol on Friday said it would soon launch an operation to improve intelligence sharing on people-smugglers.

The migrant crisis, the worst of its kind since World War II, has opened up rifts in the European Union and put unprecedented strain on the right to freedom of movement that is at the core of the bloc’s values.