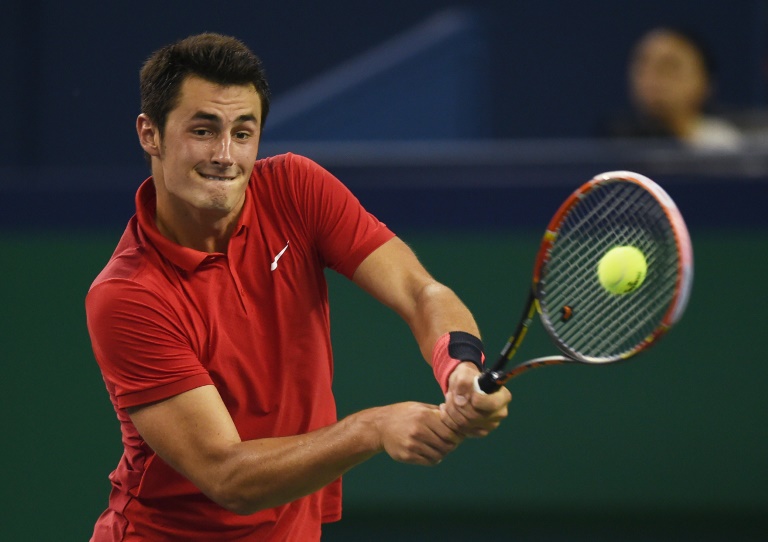 Australia’s Bernard Tomic is better known for his off-court scrapes than his tennis successes, but after a career-best year he’s showing signs that he may finally be turning the corner.

A brilliant first set against Novak Djokovic in the Shanghai Masters quarter-finals underlined an improvement that has made his fellow professionals sit up and take notice.

Now Australian tennis-watchers will hope that Tomic’s changing attitude rubs off on another bad boy, Nick Kyrgios, whose talent is also being overshadowed by his run-ins with authority.

Tomic’s well-documented fragility returned in the second set against Djokovic as he lost 7-6 (8/6), 6-1, but not before he pushed the world number one all the way in the opener.

Djokovic, who won three of the four Grand Slam finals this year, said he had noticed a change in Tomic, his sometime hitting partner who is now projected to reach his best ever ranking of 18.

“He’s been quite consistent this year. He deserves to be top 20 I think with his qualities. He’s a player that possesses a lot of talent and potential,” Djokovic said.

“There’s a lot of expectations from him from Australia and all over the world for five, six years already he’s playing on the tour. But he hasn’t been able to really be consistent throughout the year.”

The Serb added: “I think the difference this year is he’s a little bit more professional. He’s working a bit harder. It’s paying off… I think he’s on the right way.

“He just needs to commit more. He understands now that the more he works, the better it is for him. Hopefully he’s going to be even better in the future.”

Tomic beat Fernando Verdasco, David Ferrer and Richard Gasquet to reach the last eight, before he narrowly failed to become the first man to win a set against Djokovic since the US Open final.

Tomic pointed to Thursday’s late-night three-setter with Gasquet as the reason for his second-set slump, but he described the knife-edge first set as one of the best of his career.

“For me it was very, very important this first set — after, I think I was dead,” Tomic said. “I was trying to stay with him but he looked so fresh and so energetic.”

Despite his third career title in Bogota and ascent of the rankings, it hasn’t been a controversy-free year for Tomic, who clashed with Tennis Australia and was suspended for a Davis Cup tie.

Tomic has already accumulated a long rap-sheet including brushes with the law, some involving his bright orange BMW sports car. In 2013, his father John head-butted Tomic’s practice partner Thomas Drouet, breaking his nose.

A flaky attitude on court has also surfaced more than once, prompting the nickname “Tomic the tank engine”. Last year he lost the fastest recorded match 6-0, 6-1 to Jarkko Nieminen in 28 minutes, 20 seconds in Miami.

In Shanghai, Tomic showed a growing bond with the 20-year-old Kyrgios, his new doubles partner who is having problems of his own as he sets about building a career on the tennis tour.

The fiery Kyrgios, who earned a suspended ban for his sexual comment about Stan Wawrinka’s girlfriend at the Rogers Cup, has picked up three code violations in his last three matches.

The two were thick as thieves as they beat Vasek Pospisil and Jack Sock in the first round — and Australian fans will hope Tomic can now be a positive influence on his younger new friend.