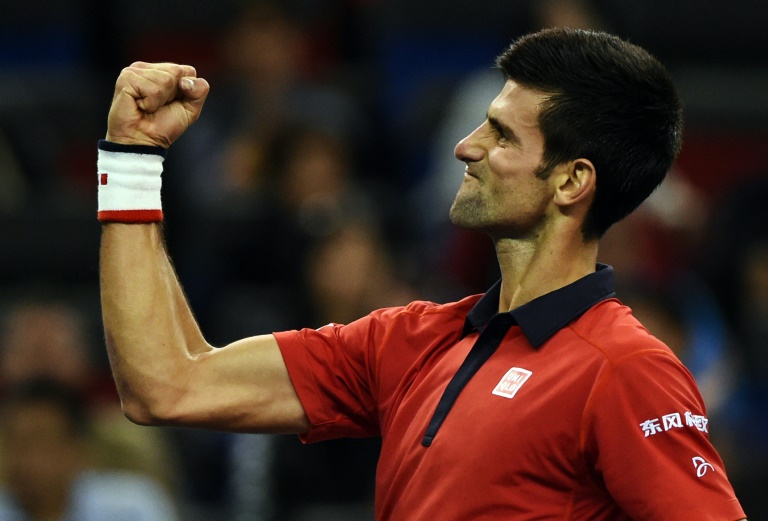 Novak Djokovic thrashed a misfiring Andy Murray on Saturday to set up a Shanghai Masters final against Jo-Wilfried Tsonga as the world number one guns for his 10th title in China.

Djokovic’s blockbuster semi-final with second-ranked Murray was hotly anticipated but the 6-1, 6-3 result was anti-climactic after Tsonga’s thrilling upset of Rafael Nadal earlier.

The mercurial Frenchman recovered from an embarrassing ‘bagel’ in the second set to win 6-4, 0-6, 7-5, pulling off one of his trademark athletic dives to bring up match point.

But Tsonga now faces the steepest of challenges against Djokovic, who moves into his 13th straight final on a 16-match winning streak, and has never lost a final in China.

Djokovic had it unexpectedly easy against Murray, who was shaky on his serve and bad-tempered with it, double-faulting to yield the first of three breaks in a forgettable first set.

Murray recovered with a break at the start of the second but crowd noises seemed to distract him as he double-faulted and then lost out in a helter-skelter rally as Djokovic broke back.

Murray’s sixth double fault put him in deep trouble as he was broken to go 1-3 down, and although he saved a match point at 2-5, a thumping Djokovic backhand saw him off in the next game.

As they played, Tsonga was already celebrating one of his biggest wins this year, while Nadal was happy to see signs of life in his game after a disappointing season.

“I was there until the end. Was not (my) day to win. I just need to adjust a little bit a few more things. But in general I have to be happy,” Nadal said.

“I believe there is no doubt that the confidence is higher now than a couple of months ago.”

The Spaniard’s serve had only been broken once all week but Tsonga finally pierced his armour in the fifth game with a smoking backhand winner before he totted up a one-set lead.

But Tsonga was all at sea in the second set and with double-faults at critical moments, Nadal broke three times to ‘bagel’ the Frenchman 6-0 and level the match.

Tsonga regathered himself for a tight deciding set and he broke for 6-5 when Nadal fired into the net.

Serving for the match, Tsonga dived full-length for a forehand volley and then got up to parry the scrambling Nadal’s reply and bring up match point, which the Spaniard lost tamely.

“I will play against a very good player. I know it’s going to be difficult. But it’s for me an opportunity to hold a new trophy anyway because I’m in final,” Tsonga said.

“It’s one match. If I win it, I’m the champion this week. I’ll take that like an opportunity, so I will give everything.”