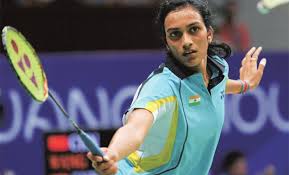 She dished out a 21-18 21-19 win over the sixth seed in a women’s singles match that lasted 45 minutes at the Odense Sports Park.

For two-time bronze medallist at World Championship P V Sindhu, the golden run seems to be a continuous streak.  At the Denmark Open, she is on a rampage mode, advancing to the semi-finals after defeating former World No.1 Chinese Wang Yihan in straight games at the USD 650,000 Super Series Premier event.

World No.13 Sindhu, who had lost to Yihan — a 2011 World Champion and silver medallist at 2012 London Olympics — four times in the past, dished out a 21-18 21-19 win over the sixth seed in a women’s singles match that lasted 45 minutes at the Odense Sports Park.

The 20-year-old from Hyderabad will next take on the current World and All England Champion, Carolina Marin, who has beaten her thrice in the last three outing. The only time Sindhu had beaten the World No. 2 Spaniard was in 2011 Maldives International Challenge.

Blowing hot and cold this season, Sindhu came into the quarter-finals with a 1-4 record against Yihan. The only time she had beaten the Chinese was at the World Championships in 2013 but the Indian produced a superb game to completely leave Yihan clueless.

Sindhu came up with a neat game where she held a 3-0 lead early on and didn’t allow Yihan to come anywhere near her vicinity in the first game.

The script didn’t change much in the second game as Sindhu once again moved to a massive 7-1 lead and zoomed to 19-15. Yihan reeled off four straight points to conjure up hopes of a turnaround but the Indian shut the door on her with two more points.