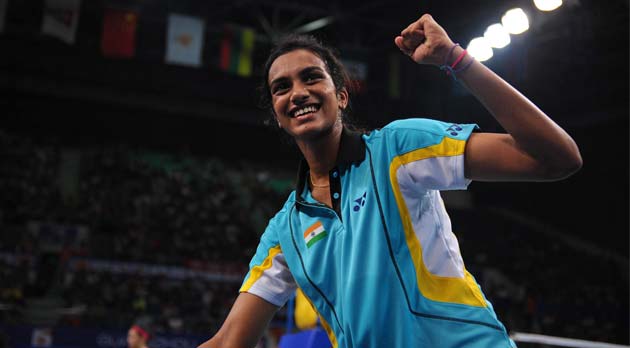 Odense, Denmark: Ace Indian shuttler P V Sindhu on Saturday made it to her maiden Super Series final with a stunning upset victory over reigning world champion Carolina Marin of Spain in the Denmark Open here.

The unseeded Indian beat the world number two and All England champion Marin 21-15 18-21 21-17 in a closely-fought semifinal that lasted one hour and 14 minutes at Odense Sports Park in the $650,000 Super Series Premier event.

This was 20-year-old Hyderabadi’s first win against Marin in their last four outings.

Sindhu, a twice bronze medallist in World Championships, will now take on former world number one and reigning Olympic champion Li Xuerui — ranked fourth in the tournament — of China in the summit clash on Sunday.

Both Sindhu and Marin began the match on an equal footing before the Indian grabbed five points on the trot to cruise to a 8-3 lead before Marin closed the gap gradually.
Sindhu, the lone surviving Indian, kept the lead as the two rivals exchanged their services for a while before the Indian took four straight points to reach to game point before pocketing the first set 21-15.

It was Marin who began the second set on a bright note as she took the early lead but the Indian fought back immediately
to make it 3-3 and then 5-3 by winning four straight points.

But suddenly, Sindhu lost her concentration as world number two Marin made it 6-6 before zooming to 11-6 by taking five points on the trot.

The deciding set was a tough contest and at one time it looked like Marin would run away as winner but Sindhu made a brilliant fightback under tremendous pressure to first close the gap and then zoomed ahead to win the tie and maintained her rampaging form in the tournament.

The Spaniard once again took three points in a row to be 15-11 ahead and it seemed that she would break free only to see a resilient Sindhu closed the gap to take the score to 14-16.

From there on, the Indian won six points on the trot to reach to the game and match point. Marin made a one last try by winning a point and take the score to 17-20 but it was all over soon as Sindhu bagged the next point to pocket the deciding set and the match.

Earlier in the quarterfinals, Sindhu had beaten former world number one Wang Yihan of China in straight games.