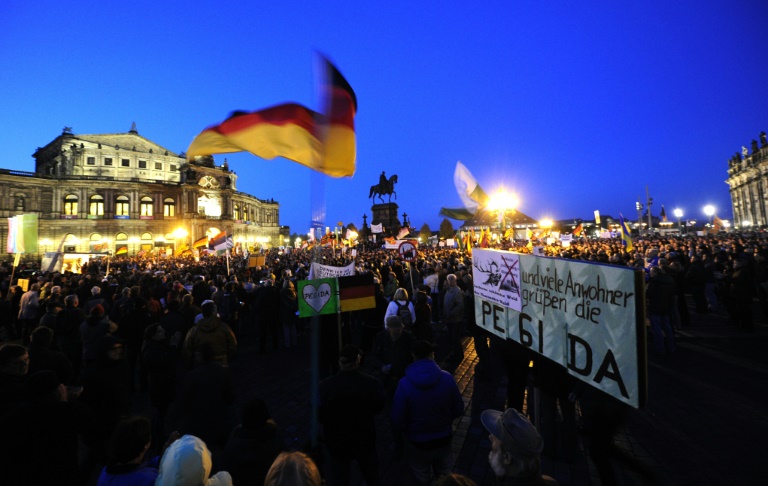 They gather in the dark, wave German flags and vent their fury at foreigners they fear are overrunning their homeland — next week Germany’s anti-Islamic PEGIDA movement turns one year old.

Radicalised by Germany’s record influx of refugees and migrants, the long-dormant protest movement has come back with a vengeance onto the streets of Dresden in the former communist East.

Last week one protester carried a mock-gallows with the names of Chancellor Angela Merkel and her deputy, despised by the protesters as “Berlin dictators” and “traitors” for their open-door policy to refugees.

PEGIDA — short for “Patriotic Europeans Against the Islamisation of the Occident” — started life as a xenophobic Facebook group around co-founder Lutz Bachmann, 42.

From a few hundred people who showed up for their first evening “Monday stroll” on October 20 last year, it grew to a peak of 25,000 in January, shortly after the Paris jihadist attacks against satirical magazine Charlie Hebdo.

“We are the people,” they have chanted, co-opting the slogan of demonstrators before the fall of the Berlin Wall, and suggesting a righteous revolt against an out-of-touch political elite and the “lying press”.

It seemed to have crashed and burned at the start of the year after Bachmann’s racist online slurs and “selfies” sporting a Hitler moustache surfaced, sparking outrage and a leadership split.

PEGIDA, and its smaller clone groups in Germany and abroad, disappeared from the streets and the newspaper headlines — until a spike in migrant arrivals in September brought them back from the dead.

“The turning point was when Angela Merkel opened the borders to let in people from Hungary,” said Nele Wissmann of the French Institute for International Relations. “This was the trigger point.”

TV footage of volunteers cheering refugees arriving on packed trains, and handing them donated drinks, food and clothes, went around the world.

To PEGIDA’s followers it set off alarm bells, and the movement regrouped, angrier than ever.

Groups were once more cheering Bachmann, undeterred by a prosecution case against him for inciting racial hatred online by having labelled migrants “animals”, “trash” and “filthy rabble”.

One banner at a recent rally accused Merkel of “ethnocide against the German people”. And the offensive gallows prop has sparked another official inquiry by prosecutors.

Experts warn the movement is turning more radical, after members recently attacked journalists, and as police report a spike in attacks against asylum-homes.

“Since the autumn it’s become really radicalised to become a right-wing movement… focused on refugees,” said Wissmann. “It is very, very serious.”

Germany was shocked to learn in 2011 that a neo-Nazi death squad calling itself the National Socialist Underground (NSU) had gone on a seven-year killing spree that claimed 10 lives, nine of them migrants.

“There must not be a second NSU,” said Wendt.

Others have argued that the re-emergence of the movement must not be overplayed, given that PEGIDA has so far drawn an estimated 9,000 protesters — compared to at least 150,000 at a Berlin rally last weekend against a planned EU-US trade agreement.

Germany, haunted by shame over the Nazi era and Holocaust, so far does not have an openly anti-immigrant party represented in parliament, unlike France, Austria, Britain and other European nations.

Timo Lochocki of think-tank the German Marshall Fund of the United States argued that despite a dip in the polls for Merkel, the ratings in fact show that the broad majority of Germans is not lured by extremists but maintains a basic trust in her government to manage the migrant wave.

The small populist right-wing Alternative for Germany party — whose leaders have voiced sympathy for PEGIDA — had so far failed to capitalise in a major way on any anti-migrant backlash, gaining just two points to seven percent, he said.

“And at this very moment, the German far-right is gaining two percent, and the governing parties have slipped from 41 to 38 percent. It’s indicating that the lion’s share of German voters still entirely trusts the German established parties.”

How PEGIDA develops will depend on how Germany manages its historic migrant influx, say experts.

Werner Patzelt of Dresden Technical University warned that PEGIDA has already become “a protest movement decoupled from the mainstream political system that could become the right-wing populist party we never wanted”.