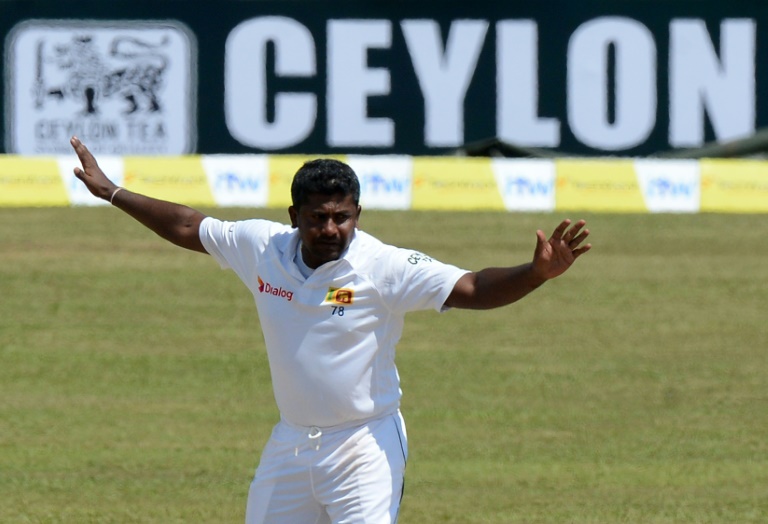 A dazzling display of spin bowling by Rangana Herath left West Indies struggling to avoid an innings defeat Friday in the first Test against Sri Lanka, still needing another 166 to force their hosts to bat again.

After taking six for 68 in the West Indies’ first innings, Herath then claimed the wicket of opener Kraigg Brathwaite, who fell for 34 as play drew to a close, for the second time in the match.

Made to follow on after putting up 251 the first time round, West Indies face a mammoth task to save the match at the Galle International Stadium with two days still left to play.

The 37-year-old Herath dominated the third day’s proceedings as he helped to bundle out the West Indies for 251 in their first innings, 33 runs short of the follow-on mark.

He is now just 15 short of becoming the third Sri Lankan to take 300 Test wickets.

“The wicket has become more bowler-friendly today after it favoured the batsmen on the first two days,” Herath told reporters after play.

“I hope to take more wickets… in this series to reach closer to the 300 wickets mark,” he added.

None of the West Indies players looked comfortable against Herath throughout the day.

Herath’s dismissal of Braithwaite was the second wicket to fall in the tourists’ second innings, following that of Shai Hope.

The 21-year-old Hope made only six before he became the debutant Milinda Siriwardana’s first victim in Test cricket, dragging the ball onto his stumps as he tried a back-foot pull.

Darren Bravo was unbeaten on 20 at stumps, batting alongside the nightwatchman Devendra Bishoo who has made six.

Bravo and Jerome Taylor were the only batsman to offer significant resistance in the West Indies’ first innings.

Bravo batted confidently to make the highest score of 50 and was dismissed to a sharp catch by Dinesh Chandimal off Herath just before lunch.

Wickets fell steadily throughout the day and the highest partnership of the first innings was a mere 46.

With the likes of Chris Gayle absent, the West Indies had been relying on experienced campaigner Marlon Samuels to provide some steel but he was bowled by Herath for just 11 in the first innings.

The tourists’ score could have been even more dismal if it had not been for a late flourish from their lower order.

The last four wickets contributed 86 runs, with Jerome Taylor leading the way with an entertaining innings of 31 which included four boundaries and a six.

Sri Lanka’s cause was aided by some outstanding fielding, with Dinesh Chandimal’s stunning catch to dismiss Bravo in full flight one of the key moments.

Sri Lanka compiled a formidable first innings total of 484 on the first two days, thanks mainly to big centuries from Chandimal (151) and Dimuth Karunaratne (186).

West Indies have a dismal record in Sri Lanka and have yet to win a Test on the island in nine previous attempts since 1993.