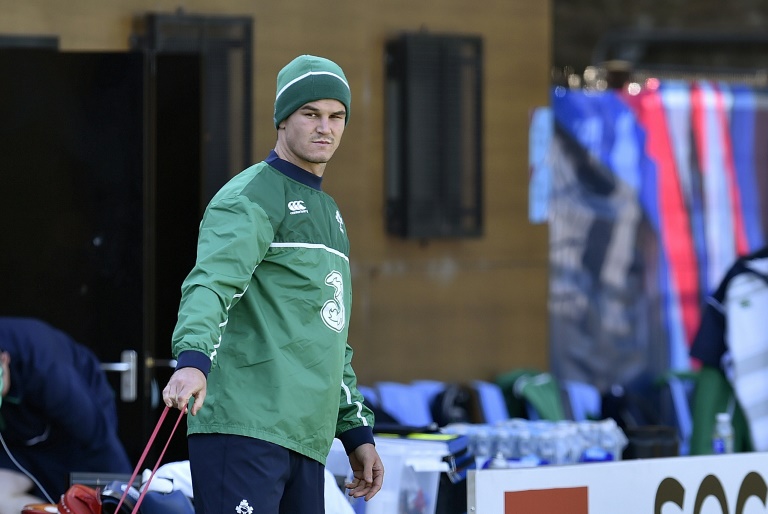 Ireland will gamble on key playmaker Johnny Sexton going the distance in their World Cup quarter-final against Argentina on Sunday, with coach Joe Schmidt saying risks are part of the game.

A week of intensive medical treatment and rehabilitation has restored Ireland’s leading point scorer and backline tactician to a position where “he is ready to go”, Schmidt said Friday.

However, he has not fully tested his goal kicking to give the torn groin as much time as possible to recover as the Irish bid to reach their first ever World Cup semi-final.

Pressed on whether the selection was a risk as Ireland faced the chance of making the semi-finals for the first time, Schmidt said: “There is always risks in everything you do.

“There’s risks in making the selections we do. You accept those risks as part of the mix in trying to get a result.”

Sexton had been under a cloud after he limped off with a groin injury 25 minutes into their final pool match against France last weekend.

However, he was named in the starting XV on Friday after taking a full part in the crucial final training session before the team was named.

Ireland’s 24-9 victory proved costly with iconic captain and lock Paul O’Connell and flanker Peter O’Mahony ruled out of the rest of the tournament with injuries and man-of-the-match Sean O’Brien banned for a week for punching France lock Pascal Pape.

Schmidt could ill-afford to be without Sexton as well but dismissed any suggestion he was being rushed back too early.

“Not really. If he’s fit, he’s fit,” Schmidt said, likening the situation to playing France in the Six Nations this year when there were also questions about Sexton’s fitness as he returned from a concussion ban but he landed five penalties to engineer an 18-11 victory.

“We don’t tend to take too many risks with injured players. We have copped a few injuries but we have managed people through the week,” he said.

“We have a fantastic medical crew, a super strength and conditioning and rehabilitation group. Johnny himself is ready to go.”

However, Schmidt revealed Sexton had a limited amount of kicking practice as he nursed his injured groin back to health.

“He kicked a bit yesterday and a bit today. He hasn’t done as much kicking as he would have but that wouldn’t be sensible either.

“We have allowed him to build into the week so that by the end of the week, after seven days, he can be ready to go.”

Jamie Heaslip has taken over the captaincy with the impressive Iain Henderson slotting into the middle row.

Jordi Murphy and Chris Henry have been brought in to replace O’Mahony and O’Brien respectively.

But Schmidt was open to changing the order during the match.

Murphy “has played across the back row before and we felt he was best positioned, having rehearsed running in that position more often than anyone else,” he said.

“We did think about putting Iain Henderson there (he started as a flanker before swtiching to the second row) and Donnacha Ryan (a lock) in and that may still happen during the game.”