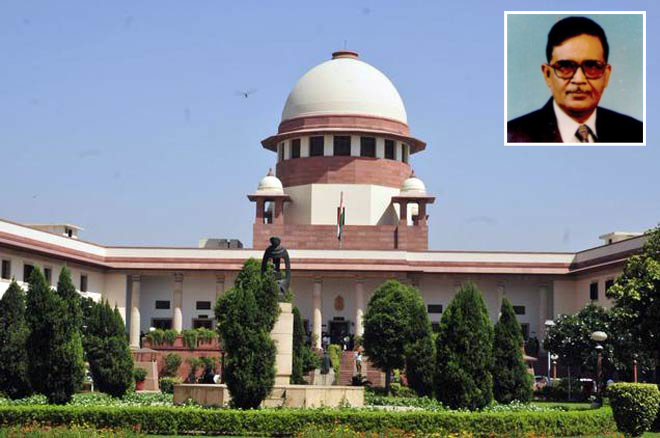 The Supreme Court recently came to the rescue of an IRS officer after 15 years of struggle. The Special leave petition was considered by a SC bench comprising Justice MY Eqbal and Justice C Nagappan on October 9.

The Attorney General of India tried to find fault with the HC order but the SC judges did not agree. They did not find any merit in the SLP and dismissed it.

The SC judges clearly found merit in Devendra Narain’s case and his advocate Abhay Singh didn’t need to argue it as the judges understood the matter.

Devendra Narain, who was about 60 years then, is nearing 75 years now. He says he has spent over Rs 3 lakh, besides thousands of hours on litigation, preparation of materials and collection of information under the Right to Information (RTI) Act, to seek redressal of grievance, all because the Government tried its level best to cover up the mistake.

Narain, who joined IRS in 1965 and retired as member, Appellate Tribunal for Forfeited Property (ATFP), in December 2002, discovered a serious anomaly on the part of the Department of Revenue (DOR) and requested remedial action.

Narain was appointed member of the ATFP in April, 1999 in the pay scale of Rs 22,400-24,500. After joining he discovered that since 1989 the DOR had been appointing members of the ATFP in a scale lower than what was prescribed under rules.

Narain requested the Revenue Secretary to rectify the mistake but instead of admitting the mistake and rectifying it, the DOR tried to cover it up.

Meanwhile, as per a notification dated December 24, 2001, the pay scale of member ATFP under the 1989 NDPSA rules was reduced to Rs 22,400-24,500. Narain challenged the legal validity of the notification before the Central Administrative Tribunal (CAT), Delhi, which gave order in his favour in May, 2003.

The Government challenged the CAT order through a Writ Petition in Delhi High Court and the HC ruled in favour of the CAT order.

According to Narain’s reply to the HC, the government’s Writ Petition and counters contained only four facts: (1) there is an ATFP to hear appeals against forfeiture of properties under the SAFEMA and the NDPSA; (2) Devendra Narain was appointed Member ATFP in the pay scale of Rs. 22,400-24,500; (3) there were representations for higher pay scale; and (4) subsequent to representations the pay scale of member ATFP under NDPSA was fixed as Rs. 22,400-24,500.

The rest was misinterpretation of rules. The government behaved as if he was demanding a higher scale of pay beyond the terms of appointment, whereas the fact was that he had simply asked for implementation of the rules framed by the government in 1989 which were illegally changed, after his representations, to his detriment.

On January 6, 2015, the Delhi HC allowed his writ petition. The Court held that the government could not amend pay scale to his disadvantage after his appointment and that he was entitled to higher pay scale with effect from the date of his joining and directed the government to pay arrears with interest.

The government accepted the High Court order but did not implement it.

Information obtained under the RTI Act indicates that in March 2015, the DOR forwarded High Court order to the Competent Authority, Delhi, one of the 5 officers in the country appointed to forfeit illegally acquired properties, for implementation.

After the Competent Authority, Delhi returned the Court order saying he was not concerned with it and the Court order was forwarded to the ATFP for implementation in spite of the fact that the sole job of the ATFP is to hear appeals against the forfeiture of properties under the SAFEMA and NDPS. It has no say in the service conditions of the Members and Chairman.

After deliberately not executing the HC order on September 1, 2015, the government filed a Special Leave Petition (SLP) before the SC six months after the expiry of 90 days limit.

Photocopies of internal file notings and other documents obtained under the RTI reveal that at every stage since October 2000, whatever the junior most official of the DOR wrote on the file, was mechanically approved by senior officers right up to Revenue Secretary.

Interestingly no senior office questioned the rationale of reducing the salary of a serving officer or of wasting so much time and money on needless litigation and now Narain is planning to raise the issue with the Prime Minister Narendra Modi who is concerned about the government getting into meaningless litigation.