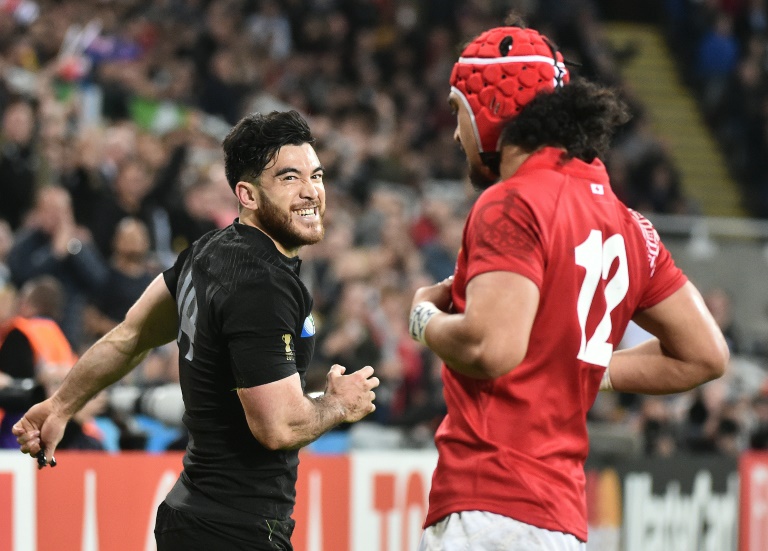 Nehe Milner-Skudder is blessed with All Blacks blood in his veins but his size makes him a rarity on the wing in the modern game.

At a time when so much attention is being paid to the injury count at the World Cup, 24 have been invalided home so far, he stands all 90 kilos (198 lbs) of him as proof there is still room for the little guy.

Ever since Jonah Lomu burst on the scene 21 years ago there has been a clamour for wings with bulk to go with speed.

There is no doubting Milner-Skudder, 24, whose surname combines those of his All Blacks relatives Buff Milner and George Skudder, has the speed.

“Isn’t it wonderful for rugby that all shapes and sizes can play the game. He’s just reinforcing that,” All Blacks coach Steve Hansen said when opting for Milner-Skudder over Naholo to partner Savea on the wing against France on Saturday.

It’s a must-win quarter-final and Hansen wanted his best players on the paddock saying size was not a factor.

“He’s a little guy. He can turn on a sixpence and has got genuine gas so that’s good.”

Milner-Skudder says it is his sense of survival that has helped him thrive.

“I’m not the biggest lad going around so I’ve got to find ways not to get rag-dolled and be on the end of some pretty big hits,” he said.

“I have to use whatever I can really and try and use my speed and evasion to get me through.”

Milner-Skudder, whose favourite toy as a youngster was a Christian Cullen teddy bear modelled on his All Blacks hero, tried to make it in Australia as a rugby league player when he left school.

When he returned to New Zealand to start a business degree he was enticed back to rugby union where an impressive 2014 provincial season propelled him into the Wellington Hurricanes this year and a rapid advancement to the All Blacks.

He can sense the whiff of a gap when others would take the tackle, a talent that has produced six tries in five Tests, starting with two on debut when the All Blacks were beaten 27-19 by Australia in August.

His uncanny ability to find his way to the try line has impressed Hansen although the All Blacks coach says his rough diamond needs more polishing.

“He’s followed a trend of All Blacks wingers. A lot over the last few years have arrived on the scene and scored a lot of tries and through that we think they’re playing really well.

“But there’s other parts of the game he’s still growing, just like the rest of them, he’s showed a lot of composure, mental fortitude and he’s enthusiastic, you need people in your team who are enthusiastic.”