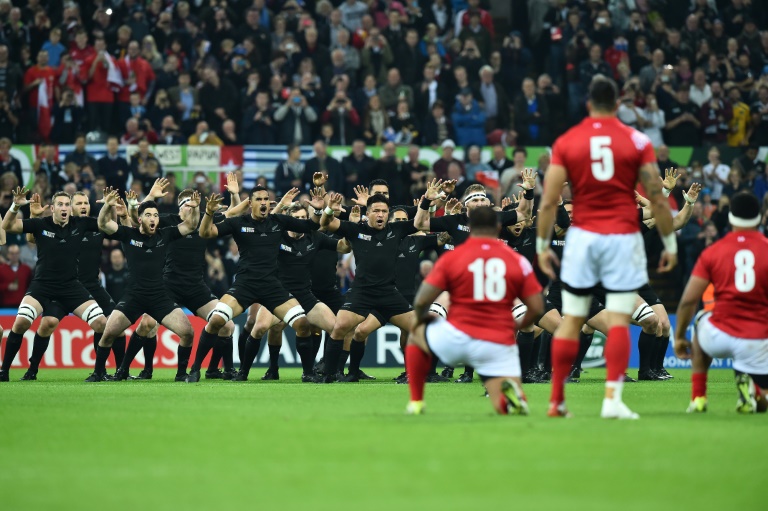 The haka is best known to rugby fans as the spectacular pre-match challenge issued by the All Blacks — but it’s also a revered cultural tradition among New Zealand’s Maori, who resent it being mocked or exploited for profit.

The All Blacks have performed the foot-stomping, eye-rolling ritual since 1905 and is now firmly entrenched as part of the sporting theatre that surrounds New Zealand’s matches.

It’s no novelty act for Maori, though, with New Zealand’s Maori Development Minister Te Ururoa Flavell describing it as “a part of our culture and identity”.

“We use haka to express ourselves in many different settings,” he told AFP. “That includes welcoming guests, saying goodbye to our dead, celebrating success (and) showing our pride.”

Small wonder then, that Maori bristle when advertising executives use their esteemed custom as a punchline in commercials and marketing campaigns.

In recent years, haka parodies have been used to sell everything from British menswear to Japanese soft drinks — all without permission and without a cent being paid to the haka’s traditional owners.

“It’s a feeling of disappointment that people don’t understand what it’s about,” Kahu Ropata, a cultural adviser with the Ngati Toa iwi (tribe), told AFP.

“Using it for profit, that’s not what the haka was intended for. It should be treated respectfully.”

Numerous versions of the haka exist, but the All Blacks only perform two — the traditional Ka Mate and Kapa o Pango, which was introduced in 2005 and includes a controversial throat-slitting gesture.

Ka Mate is Ngati Toa’s haka, composed by the warrior chief Te Rauparaha around 1820 to celebrate his escape from a rival tribe’s pursuing war party.

“The essence of the haka is about life (triumphing) over death, the little guy beating the big guy and punching above his weight,” Ropata said.

Over the years, Ka Mate has evolved into New Zealand’s haka, with Ropata pointing out: “It’s reverberated around the battlegrounds of Chunuk Bair and Gallipoli and El Alamein.”

Ngati Toa are still regarded as Ka Mate’s custodians, a situation Flavell said the government recognised last year when it passed a law requiring the iwi to be acknowledged when the haka was used.

The tribe also have an agreement with New Zealand Rugby about using the haka and last month hosted All Blacks players at their meeting house near Wellington before the players departed for the World Cup.

But such laws and agreements have no force beyond New Zealand and Ropata said his people were reliant on overseas companies doing the right thing, inviting them to consult the iwi before using the haka.

“For Ngati Toa there’s no room for disrespecting the haka,” he said.

“So the word to the marketing companies is that if they are to use it, use it appropriately.”

While commercial exploitation of the haka may rankle, Ropata said Ngati Toa took immense pride in seeking the Ka Mate haka performed on the world stage by the All Blacks.

His tribe’s Ka Mate has been the only haka performed by Richie McCaw’s men so far at this tournament, with Kapa o Pango yet to make an appearance.

France have a history of confronting the Maori challenge and Ropata was intrigued to see how they will respond to it at this weekend’s World Cup quarter-final against New Zealand in Cardiff.

“To stand there eyeball to eyeball, I think that’s the whole way of approaching it,” he said.

“It shows your opposition, in this case the All Blacks, that you’re ready to go into battle on the field.”

In 2007, the French wore red, white and blue shirts to form a giant tricolour, staring down the New Zealanders before scoring a famous 20-18 quarter-final victory in Cardiff.

Four years later, before the 2011 final, they formed a flying-V and marched into the All Blacks’ half, falling just short of a another stunning upset before New Zealand prevailed 8-7.

“It’s saying that this is our land, our whenua (territory), our field and we’re here to play,” Ropata said.