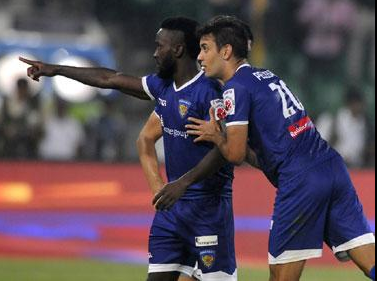 After a goalless first half, Mendoza came up with two goals in the 60th and 66th minute to hand Chennaiyin FC their second victory on the trot and leave Mumbai City FC without a win in three matches.

Mendoza is now the leading goal-scorer in the league with five goals.

In what was essentially a tight game at the start, Mumbai City FC did well to cover their defence and allow limited space for Mendoza to operate.

The Colombian striker can be dangerous when allowed to roam free, and he showed that against FC Goa with a hat-trick.

But despite being tightly policed, Mendoza had enough chances to break the deadlock in the opening 45 minutes.

His first chance came early in the game but the attempt was acrobatically saved by Mumbai goalkeeper Subrata Paul. His best chance, though, came in the 28th minute when Elano played a through ball but Mendoza’s first touch was disappointing and he ballooned the ball over with only the goalkeeper to beat.

In-between, there were chances for Thoi Singh, who made a mess of a beautiful through ball from Elano, while Raphael Augusto saw his grounder being saved just in time by Subrata Paul.

Mumbai City FC’s chances were few and far between. Most of the attacks were being orchestrated by Sony Norde on the left flank but the Haitian winger should have done better in the 42nd minute when he was put through. Instead, he allowed Chennaiyin defender Mehrajuddin Wadoo to sprint past him and come up with a brilliant clearance.

There was a chance for Frederic Piquionne as well after L Fanai freed himself on the left flank and marched ahead but his cross right inside the rival goalmouth was wasted by the French striker.

Chennaiyin FC broke the deadlock at the hour mark after Mumbai City FC erred. A costly mistake from defensive midfielder Prathesh Shirodkar just outside the box allowed Elano to latch on to the ball and then easily lay it for Mendoza to slam into an empty goal.

Mendoza scored his second goal six minutes later as Jayesh Rane’s curling effort from outside the box hit the crossbar and Mendoza was on hand to come up with a diving header that gave his team full points.