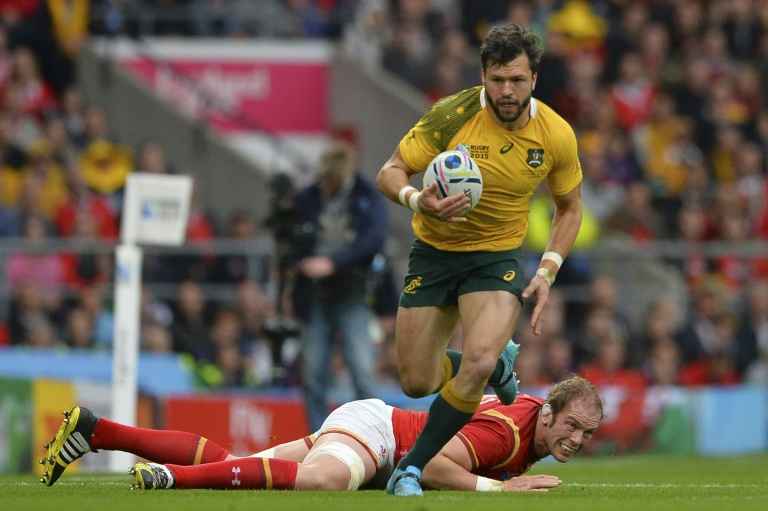 Australia great Adam Ashley-Cooper is on a personal mission to win the World Cup for his childhood friend Guy Grinham, who died in England this week of cancer.

A visibly moved Ashley-Cooper — who on Sunday will become the third most capped Wallaby of all time in the quarter-final against Scotland when he wins his 112th — visited his friend and his family in his box at Twickenham in London after the epic 15-6 win over Wales last Saturday.

An emotional Ashley-Cooper said it had been “really special”.

Grinham, a friend of Ashley-Cooper’s from his youth on the New South Wales central coast, was a utility back but went on to become a referee.

He had listed watching the Wallabies at the World Cup on his wish list of things to do before he died.

Grinham was granted his wish in being present at Twickenham for the last Pool A game with Wales where a 13-man Wallaby team — they had two players in the sin-bin — repelled wave after wave of Welsh attacks.

To cap it all it was 31-year-old Ashley-Cooper who produced the outstanding play of the heroic defence and which proved the turning point as the Welsh never threatened again.

While Ashley-Cooper has generally agreed that the Cup is not about individuals he gladly makes an exception to that rule for Grinham.

“Absolutely, I do personally,” said Ashley-Cooper when asked did he want to win the World Cup for Grinham.

Ashley-Cooper, who once sat up all night writing a poem for his Waratahs team-mates to read to them before a big match, said it had been a very moving moment to play in front of him.

“We were on his bucket list and I think being part of a team playing at a World Cup which is a significant tournament it is really special to be on his list,” said Ashley-Cooper at the Wallabies morning conference.

“I thought the least we could do as a team, as a country, was to do as much as we can to get him to that game and play for him.

“We got a really good result and it was a really nice moment to share that win with him in his box and to talk to his wife and family.

“Obviously to have a really nice moment with him before he left us was really special.”

Ashley-Cooper, who will join French Top 14 side Bordeaux-Begles after the campaign is over, said that fortunately the plan had worked out given how rapidly Grinham’s condition had declined before the game.

“I didn’t arrange for him to come over, it was his best mate and his brother,” said Ashley-Cooper.

“He went significantly downhill with the cancer spreading to his back, his vertebrae, which obviously restricted him to his bed.

“His parents flew over so they could say their goodbyes.”

Ashley-Cooper, who has been a stalwart of the team for the past 10 years, said that seeing his friend after the Wales game had been extremely emotional.

“When I went after the game it was emotional because it offered a different perspective,” he said.

“Given the tragedy and the sad circumstances it was a real eye-opener but I was really happy to be able to share something with him after the game and put a smile on his face, a genuine smile.”