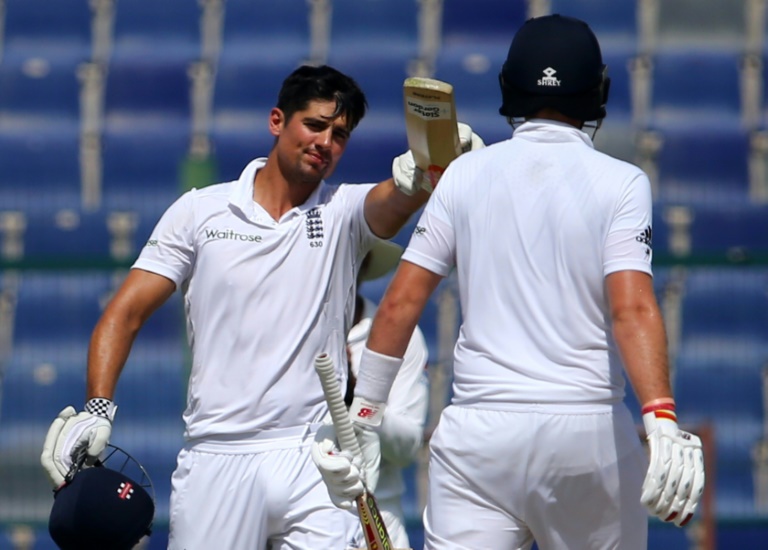 Alastair Cook relentlessly ground down the Pakistani bowlers on Friday as England edged closer to the “home” side’s huge total on the fourth day of the first Test in Abu Dhabi.

The England captain was unbeaten on 237 as England reached 468 for five at tea, just 55 runs behind Pakistan’s first innings 523 for eight declared as the prospects of a result on a flat Sheikh Zayed Stadium diminished.

Ben Stokes was the other unbeaten batsman with 16.

Cook came to the crease in the last hour of the second day and has since batted with authority and grit, smashing 17 boundaries during his resolute 471-ball knock.

He added 141 runs for the fourth wicket with Joe Root who made 85 after England resumed at 290-3.

Paceman Rahat Ali provided Pakistan with the breakthrough after they went wicketless in the extended two-and-a-half hour first session, longer due to Friday prayers.

After lunch Root played a rash shot off a wide delivery and was caught by wicket-keeper Sarfraz Ahmed. He hit seven boundaries during his 143-ball stay.

But it was Cook’s third double century that enlivened an otherwise dull day.

Cook flicked paceman Wahab Riaz to backward square-leg for two to complete his double century off 395 deliveries, the second of the match behind Pakistan’s Shoaib Malik’s 245.

Pakistan were once again sloppy in the field as they missed another chance to dismiss Cook when wicket-keeper Sarfraz Ahmed failed to take an inside edge off Riaz when the England captain was on 173.

Cook was also dropped when on 147 off spinner Zulfiqar Babar on Thursday.