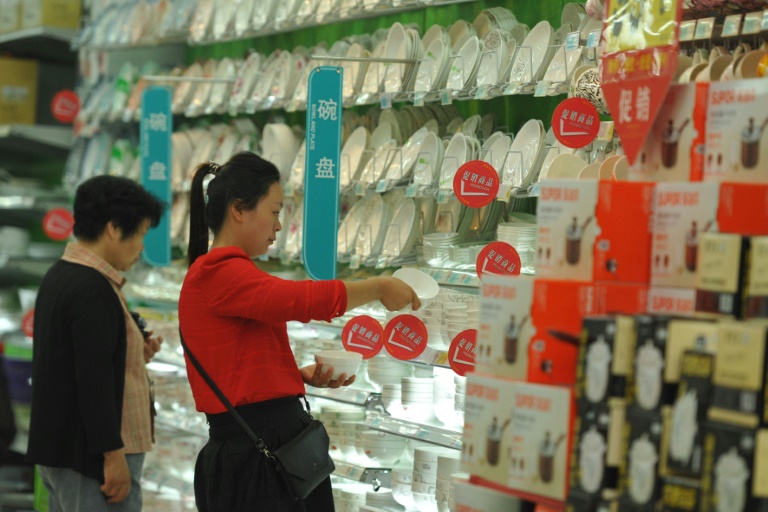 China probably grew at its slowest pace since the depths of the global financial crisis in the third quarter, an AFP survey has found, confirming investor fears following stock market turmoil and a currency devaluation.

Signs the world’s second-largest economy — a key driver of global growth — is struggling will add to pressure on Beijing to do more to head off a hard landing.

Output rose an annual 6.8 percent in the July-September period, according to the median forecast of a survey of 19 economists.

The figure — to be officially announced on Monday — would be the worst since early 2009 and comes after a raft of weak data has fanned concerns Chinese growth is slowing sharply, sending shivers through international markets.

Those worries turned into a worldwide rout after a Chinese stock market bubble burst in June, wiping some 35 percent off Shanghai shares to date, and a surprise devaluation of the yuan currency in August stoked fears about stalling growth.

The wake-up call has slammed other emerging economies, delayed a move by the United States to raise interest rates and sent prices of commodities such as copper and oil, which China imports on a massive scale, plummeting to multi-year lows.

In March, Premier Li Keqiang forecast 2015 economic growth would be about 7.0 percent, as the country shifts to a “new normal” driven by domestic consumption instead of exports and government investment.

The AFP survey showed economists expect China’s economy to grow 6.9 percent this year, missing the target — though the qualifier of “about” would allow Beijing’s leaders to declare victory.

“We all know it is impossible to realise the 7.0 percent growth target this year,” said Chang Jian, China economist for Barclays Capital which is forecasting 6.5 percent for the third quarter and 6.6 percent for the full year.

“The downward trend will continue next year and the slowdown will go on for quite a long time,” she said.

Economic statistics in China — where the government depends on growth for legitimacy — are often viewed with scepticism, spurring suspicion that the true growth rate is lower than stated.

The International Monetary Fund this month pointed to the risk from stalling growth in China, warning the country is headed for a sharper than expected slowdown unless leaders get a grip on the economy.

China has already cut interest rates five times in a year and slashed the amount of cash banks need to hold to boost lending, but that stimulus has yet to be seen substantially driving real economic growth.

Analysts now widely expect China to further boost fiscal spending and ease monetary policy before the end of the year to prevent a “hard landing”.

“We expect that there will be more monetary easing in the fourth quarter… which will lead to a rebound in the economy,” said Ma Xiaoping, a Beijing-based economist for HSBC.

Prominent Chinese figures have played down the slowing trend, including Jack Ma, the founder of e-commerce giant Alibaba which has seen its US-listed stock plunge as a proxy for the flagging economy.

“Just like a human being, when you grow to 1.8 metres tall, you cannot keep up 10 percent growth every year,” Ma said this week, as the company began to count down to China’s biggest online shopping day on November 11.

“Slow is good for China. Slow is healthy,” he said.

But weak economic data from September has put stock markets on edge.

Consumer inflation fell to 1.6 percent and the producer price index — which measures the cost of goods at the factory gate — dropped 5.9 percent, matching a six-year low in August.

But Industrial Bank chief economist Lu Zhengwei predicted the outlook to pick up later this year: “Investment will be better than the third quarter and the loose monetary policy will start to take effect.

“At least the economy will not get worse.”