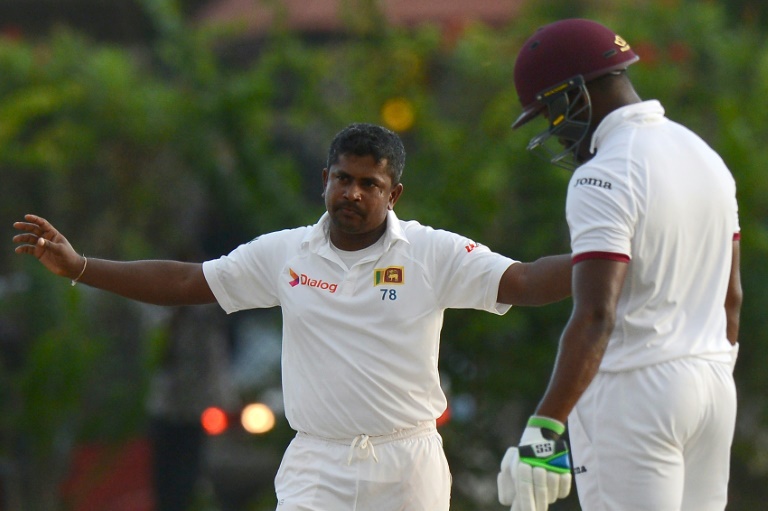 Rangana Herath dismissed both West Indies openers to leave the visitors struggling at 66-2 at stumps Thursday on the second day of the first Test in Galle, still trailing Sri Lanka by 418 runs.

The veteran spinner had Kraigg Brathwaite trapped leg before wicket for 19 in his second over before sending Shai Hope packing for 23, putting the brakes on what had been a brisk fightback from the West Indies.

The visitors’ hopes of saving the match now lie in the hands of two of their most experienced batsmen, Darren Bravo and Marlon Samuels, who were unbeaten at the close with 15 and seven.

West Indies still face a huge task to avoid the follow-on after Sri Lanka posted a formidable total of 484 in their first innings, despite the loss of their last five wickets for just 36 runs.

The cornerstones of Sri Lanka’s innings were centuries by Dimuth Karunaratne who made 186 and Dinesh Chandimal who scored 151. Their 238-run partnership for the third wicket set a new record for any wicket in Tests between Sri Lanka and the West Indies.

Leg-spinner Devendra Bishoo took three lower order wickets to finish with figures of 4 for 143 in 40.3 overs while Jerome Taylor was the pick of the West Indian fast bowlers, taking 2 for 65.