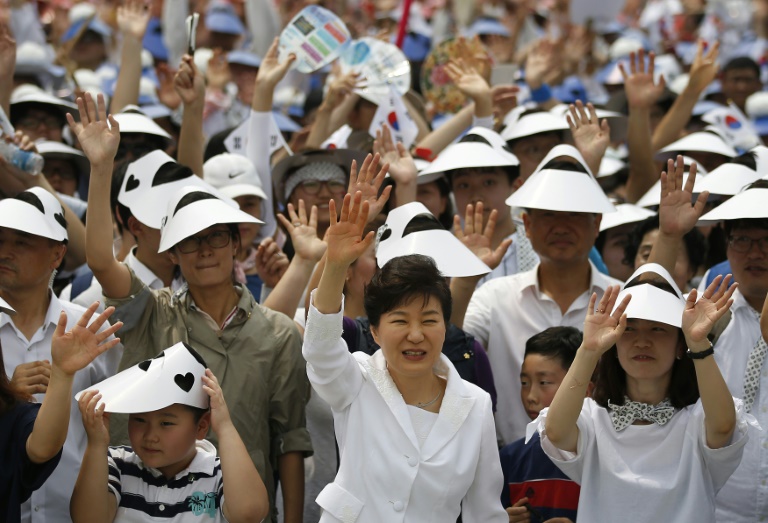 US President Barack Obama will welcome his South Korean counterpart to the White House Friday, hoping to cement close ties amid Seoul’s overtures to China.

The two leaders are expected to stress cooperation on a range of global issues from health to cyber security, as well as collaboration on an unmanned mission to the moon.

It is a purposeful show of unity, amid shifting alliances and power balances in northeast Asia.

Now at the mid-point of her five year term, Park Geun-hye has tried to carve out a bigger diplomatic role for South Korea, notably growing closer to US rival China.

Park and Chinese President Xi Jinping have met six times over the past two-and-a-half years — most recently last month when she was the most prominent leader of a US-allied nation to attend China’s giant World War II military parade.

Obama hosted Xi at the White House last month, offering an opportunity for him and Park to compare notes and show an alliance forged from the embers of World War II.

“Sure, China is our biggest trading partner and a strong neighbor but the US is our key military ally whose importance to South Korea is still incomparable,” said Kim Hyun-Wook, a professor at the Korea National Diplomatic Academy in Seoul.

North Korea is likely to feature near the top of the presidents’ agenda.

“The two leaders will reaffirm their close coordination against the North, discuss ways to deal with the North’s tactical provocations and to resume a meaningful dialogue on denuclearisation,” said a senior South Korean official.

With existing nuclear talks all but dead, Park is under domestic pressure to resolve a crisis that for decades has cast a terrifying pall over South Korea’s spectacular economic emergence.

During three days of events in Washington, culminating in an Oval Office meeting with Obama, officials say Park will press for her Northeast Asia Peace and Cooperation Initiative — a forum that would including North and South Korea, the United States, Japan, China, Russia and Mongolia.

The initiative is seen by Seoul as a way to bolster regional cooperation and keep much-constricted diplomatic channels open with bellicose nuclear-armed neighbor North Korea.

The sixth and perhaps final round of talks ended in 2008, when North Korea fired a Taepodong-2 ballistic missile.

But it remains to be seen if Park can translate ever-closer relations with China into vital backing from Pyongyang’s biggest benefactor, or overcome skepticism in Washington about her regional initiative.

Obama has little over a year left in office and a fresh US push on North Korea is seen as unlikely.

Obama, for his part, will likely stress the need for South Korea to improve relations with Japan that have been tarnished by continued debates over Imperial Japan’s war time treatment of Koreans.

The rift has prevented any summit meeting between Park and Japanese Prime Minister Shinzo Abe — an impasse that has frustrated Washington.

Park’s bid to create something akin to Europe’s OSCE represents a cautious step by South Korea toward playing a bigger role in resolving tensions in its backyard.

Seoul has in the past been reluctant to be too assertive, fearful of creating too much distance between itself and Washington.

Many South Koreans would like to see a more conciliatory approach to the North, although many of Park’s key military advisors take a harder line.

Park’s father came to power in a military coup and her mother was killed by a pro-North Korean assassin.

Officials say Park’s initiative would not be a replacement for nuclear talks, instead tackling less controversial issues in a bid to build trust.

The environment and nuclear safety are among the subjects to be tackled.