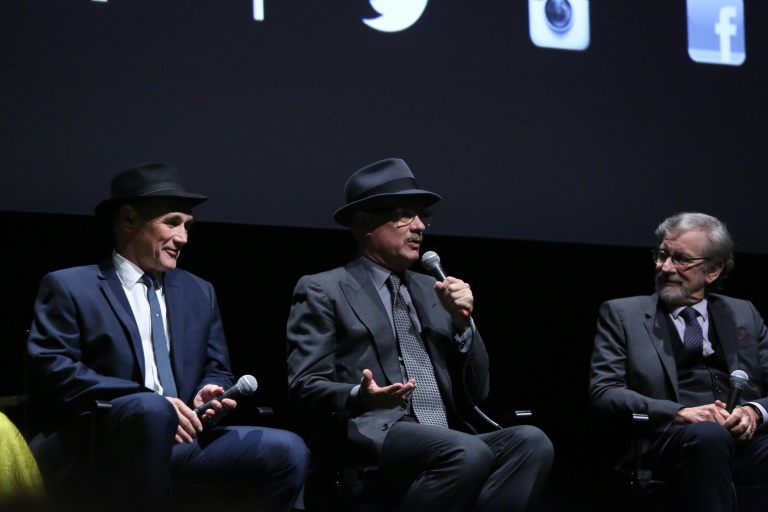 The true story of the unassuming Brooklyn insurance lawyer who secured the release of a captured American pilot from the Soviet Union marks Steven Spielberg’s latest bid for Oscar glory.

“Bridge of Spies” opens at the American box office on Friday during possibly the worst crisis in US-Russia relations since the end of the Cold War, fueled by the wars in Syria and Ukraine.

Spielberg portrays Donovan as going above and beyond to defend Abel at trial, save him from death and ultimately hand him over to the Soviets in exchange for a shot down U-2 pilot and a detained American student.

It is the latest in a long line of projects between Spielberg and Hanks, who are friends, and introduces British stage actor Rylance to a mainstream Hollywood audience for the first time.

“There’s something about this character that Tom really respected, the fact that he was gonna be a badass,” Spielberg told the Academy of Motion Picture Arts and Sciences.

Following the likes of “Catch Me If You Can,” “Schindler’s List” and “Munich,” the movie also consolidates Spielberg’s fondness for turning extraordinary true stories into celluloid dramas.

Early reviews have been solid, praising its slick entertainment if chaffing at its plodding message about what America stands for, and drawing parallels between the story and present-day controversies over Guantanamo Bay and NSA surveillance.

The story begins in 1957, when Donovan was chosen by his law firm to defend the undefendable: Abel — the multi-lingual Russian spy arrested after nine years undercover in New York.

The US government and Donovan’s legal associates wanted Abel to have the semblance of a proper defense, but no more.

The movie tells of a man who risked everything to fight for his client, who was sentenced to 30 years in prison, eventually taking the case all the way to the Supreme Court.

Five years later, Donovan was thrust into the center of the Cold War when the CIA sent him on the near-impossible task of negotiating the release of Francis Gary Powers, the American U-2 pilot shot down over Soviet airspace in May 1960.

Spielberg emphasizes the chance manner in which his hero becomes an agent of history, mentioning only in passing that he had been an assistant at the Nuremberg trials in 1945-46.

The film is shot in classic style, with limited action sequences and a script written by Matt Charman with Ethan and Joel Coen, that focuses on human and cross-cultural relationships.

Much of it hinges on Hanks, who plays a person who clings to his convictions to go it alone against the Soviets, East Germany, the CIA, his colleagues and the opinion of his wife and children.

Filmed on location in New York, Germany and Poland, Donovan slowly reveals himself bit by bit to be master of his emotions, but at the same time human and funny.

“I just found Tom to really find this guy very quickly,” said Spielberg in the online video interview with the Academy.

It turns out his only true partner is Abel, whose detachment, integrity and humor is played with subtle brilliance by Rylance, earning the British actor rave reviews and an early nod as a Best Supporting Actor contender at next year’s Oscars.

Rylance, an award-winning stage actor, starred in this year’s hit BBC series “Wolf Hall” and will also star in Spielberg’s forthcoming “The BFG” an adaptation of the Roald Dahl story.