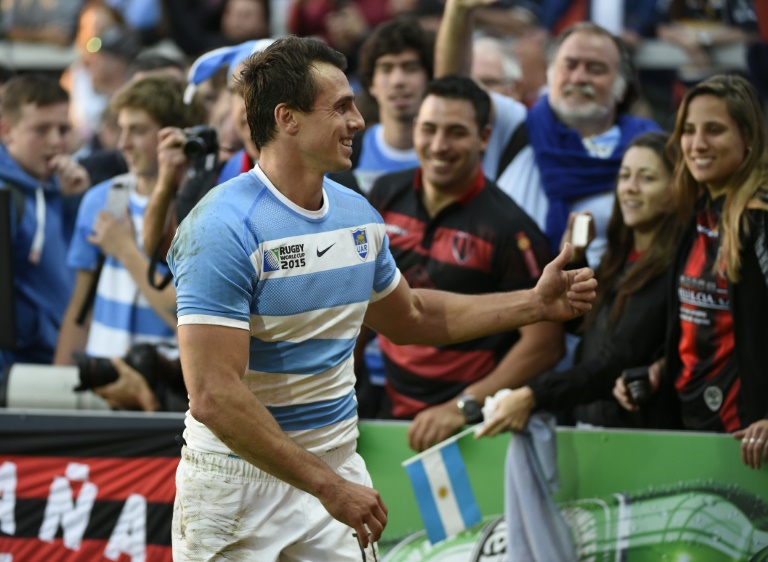 Argentina’s star wing Juan Imhoff could be playing for his Pumas place in the World Cup quarter-final against Ireland this weekend and he wants that to be against Jonny Sexton.

A standout performer needing just one touchdown to become the Pumas’ leading World Cup try-scorer, Imhoff faces being shut out of the national team after the World Cup if he stays with his French club, Racing 92.

The Argentina Rugby Union has warned that players who are not part of the Buenos Aires team entering the southern hemisphere’s Super Rugby championship in 2016 will not be considered for Los Pumas.

Argentine officials say it is not yet an official policy and Imhoff — along with Marcelo Bosch who plays for English side Saracens — could still get an exemption.

But coming into the World Cup, the 27-year-old Imhoff, said he stood by his move to Paris-based Racing.

“I feel good at Racing. I have been lucky and today I am living a dream. I take responsibility for this decision, he told AFP.

Imhoff is now more worried about taking on Ireland at Cardiff’s Millennium Stadium on Sunday and seeing whether former Racing team-mate and star fly-half Sexton plays.

The native of Rosario — more famous for producing football stars Lionel Messi and Angel di Maria — wants to see Argentina repeat their performance at the 2007 World Cup, when they reached the semi-finals.

It was watching those matches — including a 30-15 win over Ireland which saw them into the quarter-finals — that convinced a 19-year-old Imhoff to plunge into rugby.

Now he is a leader in a team who have beaten Australia and South Africa in the past 12 months, building on the attacking style promoted by coach Daniel Hourcade.

“Ireland are not stupid, they know that attack is our greatest strength,” Imhoff said at his side’s Cardiff base. “If we can launch some good attacks, maybe we can make them have doubts.”

Against Ireland, Imhoff could face his former team-mate and he has been closely watching Sexton’s bid to overcome an adductor strain suffered in the 24-9 win against France last Sunday.

“He doesn’t like to miss a game, but he relies a lot on his physical condition,” Imhoff said.

“It took him a lot to reach his physical level.

“He needs to feel that everything is perfect. But he will want to play even if he is only 60 percent. We can take advantage of this.

“I want to beat Jonny Sexton. He is a person that I like a lot, that I admire, and I have played with him.

“I would like to beat him because of my respect for him and to grow as a player. There is no rivalry and I am not angry with him. I never had a problem with him. He is a great of rugby.”

Imhoff compared Ireland to South Africa, who Argentina beat for the first time in Durban in August in the southern hemisphere Rugby Championship.

It is a team with a “full-on” physical style, said Imhoff.

“Their only weakness could be an over-confidence that they are physically stronger. It reminds me of the South Africans. They are a very structured team and if we can break that structure they could get lost.”