Home World Pistorius to be released on parole next Tuesday 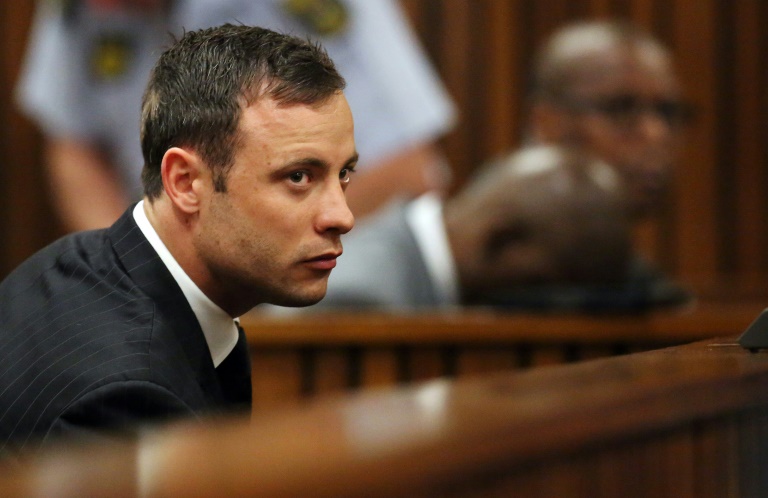 Oscar Pistorius was expected to be placed under house arrest next week after officials Thursday said he would be paroled having served one year of a five-year term for killing his girlfriend Reeva Steenkamp.

Lawyers for the South African Paralympian star had argued he should have been allowed out in August after serving a sixth of his sentence for killing Steenkamp in 2013.

But he remained behind bars after Justice Minister Michael Masutha made a last-minute intervention and the case was referred for review.

Steenkamp’s parents say Pistorius killed their daughter on purpose and have contested any parole.

“They are not surprised at all — it was expected,” Tania Koen, a lawyer acting on behalf of Steenkamp family, told AFP after speaking to June and Barry Steenkamp on Thursday.

“But it doesn’t change anything in their lives. Their daughter is still not coming back.

“Whether Pistorius is incarcerated or released on parole, their daughter is still gone.”

After meeting last week, the parole board said it wanted to consult with Steenkamp’s family over Pistorius’s possible release.

An official statement from the department of correctional services said the parole board “approved the placement of offender Oscar Pistorius under correctional supervision as from 20 October 2015.

“The parole board considered all submissions, including the offender’s profile report, the directives of the Parole Review Board and the submission of the victim’s family.”

It gave no details about Pistorius parole conditions except that they included “continued psychotherapy” and firearms restrictions.

Legal experts said the decision entailed house arrest, with severe restrictions on his movement. He may have to wear a tracking tag and report regularly to a local police station.

Pistorius’s family had accused officials of bowing to “political and media hype” in denying him parole.

“I do think correctional services have probably considered how unfairly he has been treated. He should have been released on August 21,” Brian Webber, a lawyer representing Pistorius, told AFP last week.

In a trial that made headlines around the world, Pistorius, now 28, was jailed last year for killing Steenkamp, a model and law graduate.

He was found guilty of culpable homicide — a charge equivalent to manslaughter — after saying he shot her through a locked bathroom door because he mistook her for an intruder.

After his release, Pistorius will face a further test on November 3 when prosecutors appeal to South Africa’s Supreme Court for a murder conviction and a tougher sentence.

Once a poster boy for Paralympic sport, Pistorius, known as the “Blade Runner” for the prosthetic legs he wore on the track, rose to global fame when he raced against able-bodied competitors in the 2012 London Olympics.

The trial revealed the world-famous athlete to have a volatile personality and a penchant for guns.

He was accused of firing a gun through the sunroof of an ex-girlfriend’s moving car in 2011 and, weeks before he shot Steenkamp, he accidentally discharged a gun at a Johannesburg restaurant.