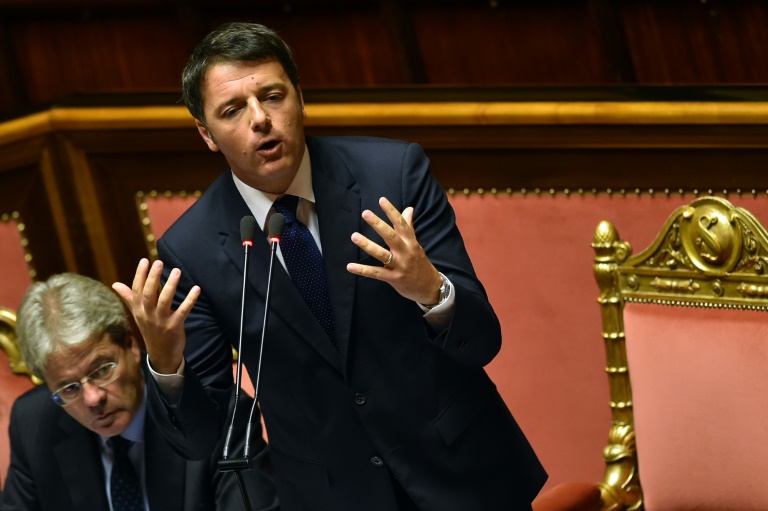 Buoyed by a major breakthrough in his wide-ranging reform programme, Italian Prime Minister Matteo Renzi on Thursday unveils an expansionary 2016 budget designed as a shot in the arm for a still-sickly economy.

The youthful premier has already revealed much of the content of a package he says will contain up to 27 billion euros worth of tax cuts and new investment to foster growth, despite concerns in Brussels that the giveaway will slow the rate at which Italy is reducing its 2.2 trillion euro debt mountain.

That move has been sanctioned despite fears it will encourage the growth of Italy’s huge black economy and weaken the fight against tax evasion, money laundering and fraud.

The new budget will be approved by the cabinet and simultaneously sent to Brussels, where the European Commission will assess its compatibility with the EU’s Stability Pact debt and deficit rules, potentially demanding revisions before it becomes law.

With that possibility in mind, Renzi got his retaliation in first — highlighting the significance of this week’s vote by the Italian Senate to abolish most of its powers in a reform that should lead to Italy having much more stable and effective government.

“Every day that we add another piece to the complicated mosaic of reforms, Italy gains additional credibility,” he told parliament on Wednesday.

“Italy was always being called up for not implementing what it promised to do; now, day after day, reform is becoming a reality,” said the centre-left leader, a long-standing critic of EU rules he often refers to as the “Stupidity Pact” because of their emphasis on fiscal austerity.

Renzi has already won admirers across the EU for the progress he has made in shaking up Italy’s labour market with a Jobs Act that is now seemingly having an impact in terms of falling unemployment.

He has pleaded for maximum leeway from Brussels on the interpretation of the deficit rules, maintaining the priority has to be growth for an economy which has barely grown this century.

The Senate reform, he told parliament, “gives us more authority and credibility at the European table, including the right to say that European policies of the last few years have not produced results.”

French bank Societe Generale said in a note to investors that Italy’s budget was likely to be broadly acceptable to Brussels.

“It is unlikely, however, to obtain all the flexibility it is asking for,” the bank said, but added: “the deviation from the objective should not be significant enough for the Commission to ask for corrective measures.”

Italy said earlier this year that it would aim to bring its deficit down to 1.8 percent of GDP in 2016 — well below the EU’s ceiling of three percent and low enough to ensure its crippling debt level would begin to fall.

But Renzi jettisoned that target last month in order to fund a fiscal giveaway involving the abolition of a loathed tax on primary residences as well as charges on municipal services and farm buildings.

The deficit is now projected to be 2.2 percent in 2016 and any slippage on improved growth forecasts could result in the debt level — which stands at more than 130 percent of GDP — stagnating rather than beginning to edge downwards.

There are also misgivings in Brussels about Renzi’s focus on cutting property taxes, seen as an inefficient way of boosting economic activity.

The premier’s aides respond that the tax cuts should be seen as part of a broader 2013-18 programme designed to ease Italians’ total tax burden by some 50 billion euros — the bulk of which will involve reductions in corporate and payroll taxes.

As well as allowing the deficit to run higher than previously envisaged, Renzi will make full use of the gains from better-than-expected growth and lower-than-expected debt servicing costs to fund his budget.

But he also has to cut government spending and the detail of that part of the budget will be what most economists will be looking for on Thursday.