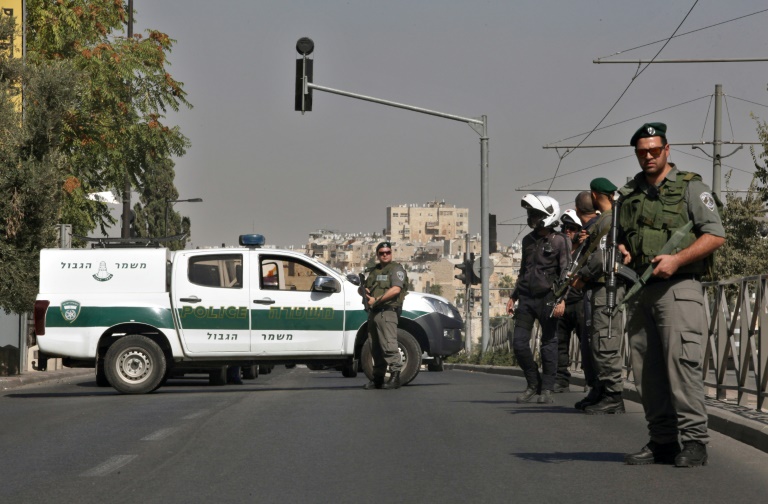 Israeli security forces deployed massively in Jerusalem Thursday as Jews armed themselves with everything from guns to broomsticks, rattled by a wave of Palestinian attacks that have shaken the country.

Some 300 soldiers were reinforcing police, stretched thin by a two-week upsurge in violence that has raised fears that a third Palestinian intifada, or uprising, might erupt.

They are due to be in place by Sunday, while conscripts wearing fluorescent vests marked “police” could already be seen guarding Tel Aviv’s bus station.

The last time soldiers deployed in such large numbers was in 2002, during the second intifada, according to a security source.

And at stops along the highway between Jerusalem and the West Bank city of Hebron, a major junction to other points in the occupied territory, border police were boarding and searching every bus.

In addition to the attacks, violent protests have rocked annexed east Jerusalem, the occupied West Bank and the Gaza Strip.

Seven Israelis have been killed and dozens wounded.

At least 30 Palestinians have also died, including alleged attackers, and hundreds more been wounded in clashes with Israeli forces.

Israel’s best-selling newspaper, Yediot Aharonot, was full of photos Thursday of Jews arming themselves with even broomsticks and rolling pins, as gun sellers said demand had skyrocketed.

But other stores are suffering, with shoppers staying off the streets.

“Business is at 15 percent of normal,” said Aron Silverberg, who runs a cellphone shop in central Jerusalem’s Mahane Yehuda market.

With fear spreading among Jews, police said soldiers on a train near the northern port of Haifa saw someone they considered suspect and began to shout “terrorist”.

An officer sitting in the front carriage fired a single shot in the air and someone later pulled the emergency brake. No suspect was found and no one was hurt.

He said “civilians are in the front line, at very short range as a consequence of the fact that the main weapon is the knife, occasionally also firearms.”

On Wednesday, police began setting up checkpoints in parts of east Jerusalem, including the neighbourhood that was home to three Palestinians who carried out gun, knife and car-ramming attacks this week.

The move followed a decision by Prime Minister Benjamin Netanyahu’s security cabinet authorising police to seal off or impose a curfew on parts of Jerusalem.

Shahr Omraq, 51, a cleaner from east Jerusalem, said the unrest has made him and other Palestinians objects of Israeli hostility.

“Everyone suspects us,” he told AFP. “Racism is growing.”

Despite the new security measures, there were two more stabbing incidents in Jerusalem Wednesday.

Netanyahu has come under immense pressure to halt the violence, but frustrated Palestinian youths have defied attempts to restore calm.

Palestinian president Mahmud Abbas again called Wednesday night for peaceful resistance, but young people fed up with Israel’s occupation and the lack of progress in peace efforts have grown tired of his leadership.

The attackers seem to be mostly acting on their own. With no mastermind to pursue, that poses a major challenge to security forces.

While the attacks have fanned Israeli anger and fear, online video footage of security forces shooting dead alleged assailants has fed Palestinian anger, with protesters seeing some of the killings as unjustified.

US Secretary of State John Kerry said Thursday he plans to travel to the region “in the coming days”.

“We have seen an eruption of tragic, outrageous and unjustified attacks on innocent civilians who were simply trying to go about their daily business in Israel, the West Bank, Gaza and Jerusalem,” Kerry said in an address at Indiana University.

The violence began on October 1, when a suspected cell of the Islamist movement Hamas murdered a Jewish settler couple in the West Bank in front of their children.