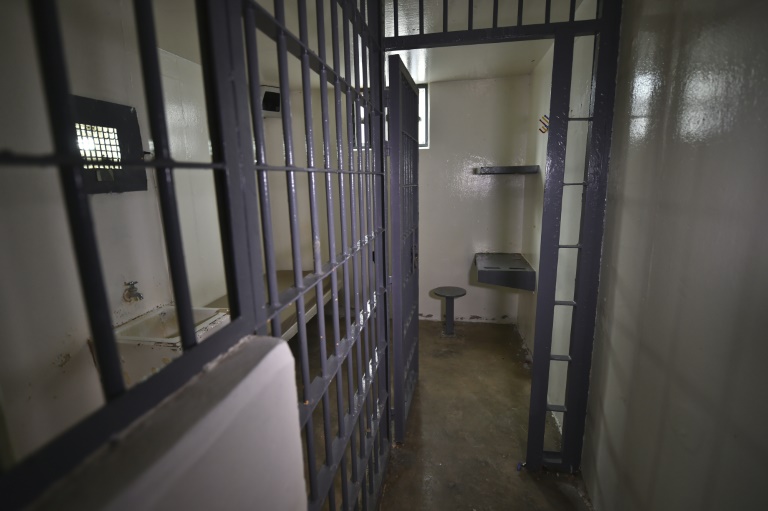 New surveillance footage of Guzman’s July 11 escape, leaked to the Televisa channel on Wednesday, featured for the first time audio from the maximum-security prison cell near Mexico City.

The images show previously unseen footage before and after Guzman sneaked down a hole in his shower. Televisa also obtained images from the surveillance camera control room.

Guzman, 58, lay on his bed under a blanket while watching a show on a small television when the loud hammering suddenly rings out.

The Sinaloa drug cartel chief gets up, heads to the shower, bends down behind a dividing wall, and disappears at 8:52 pm. Nobody seems to immediately react among the half-dozen people working in the control room.

A guard is later heard speaking to a commander, saying as he looks between the cell’s bars: “There’s a hole in the shower.”

When the commander asks the size of it, the guard answers: “Large, chief, large.”

It is only at 9:29 pm, or 37 minutes after Guzman slipped out, that guards finally open the cell door and go into the hole.

One guard can be heard saying that the hole was sealed farther down.

Guzman fled through a 1.5-kilometer (one mile) tunnel with a redesigned motorcycle on special tracks, emerging in a house outside the prison.

Opposition Senator Alejandro Encinas, a member of Congress’s bicameral security committee, accused the government of “lying and hiding information” to lawmakers about the escape, noting that officials had said that it took 18 minutes for guards to go to the cell.

Encinas also complained that authorities had refused to provide a copy of the video to his committee.

More than a dozen officials have been arrested over the escape, including several guards, the prison director and the head of Mexico’s national penitentiary system.

The jailbreak was a massive embarrassment for President Enrique Pena Nieto, who lost one of the greatest victories of his administration.

Guzman had been captured in February 2014 after a 13-year manhunt. He had previously escaped from another maximum-security prison in 2001 by sneaking out inside a laundry cart.

Pena Nieto had refused to hand Guzman over to the United States, but the authorities have now secured an arrest warrant to extradite him if he is captured again.