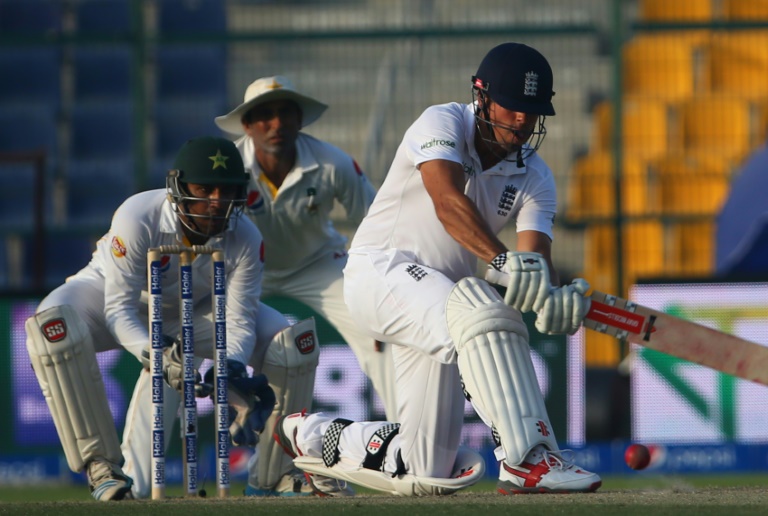 England captain Alastair Cook dished out a resolute century to lead his team’s remarkable fightback in the first Test against Pakistan in Abu Dhabi on Thursday.

Cook knocked 168 not out for his 28th hundred — fifth against Pakistan — as England reached 290 for three at close on the third day on a flat Sheik Zayed Stadium pitch.

Cook added an invaluable 116 for the first wicket with opener Moeen Ali (35) and another 165 for the second wicket Ian Bell who made a hard-fought 63.

Joe Root was the other unbeaten batsman on three as England still trail Pakistan’s mammoth first innings total of 523 for eight declared by 233 runs with seven wickets intact.

Pakistan were hoping their big total would put England under pressure but Cook, regarded a better batsman against spin than his other team-mates, took the fight to the Pakistani bowlers who managed just three wickets in the day.

It could have been only one wicket but paceman Wahab Riaz (2-79) dismissed Bell and nightwatchman Mark Wood (four) in successive overs for consolation wickets.

It was Cook who took the honours with some determined batting.

He drove Riaz for an exquisite cover drive for his tenth boundary to complete his century in Tests before tea, raising his bat in celebration.

Babar was again unlucky when substitute fielder Fawad Alam failed to hold on to Cook’s uppish sweep, with the batsman on 147.

Cook took two on that lapse and two balls later completed his 150 off 282 balls with a single. In all he has so far hit 15 boundaries off 329 balls.

Pakistan also used Shoaib Malik and Asad Shafiq but it turned out to be a nightmarish pitch for the slow bowlers, with 130 overs of spin failing to buy a single wicket.

England spinner Adil Rashid, Ali, Root and Ben Stokes (one over as spinner) also failed to get a single wicket in a combined 70 overs.

“Definitely we missed Yasir because he was suitable to this pitch,” said Ahmed. “This is a very slow pitch and allows the batsman to manage anything and add to that, we missed a couple of chances.”

“He (Cook) has shown that he can do well in this part of the world,” said Bell. “His shot selection against spinners was world class and he would be ready to go on tommorow.”

Earlier, Cook and Ali resumed the day at 56-0, bringing up the century stand in the first hour of play as Pakistan attacked through pace at one end and spin from the other.

But at 116, left-hander Ali edged an outgoing delivery from paceman Imran Khan to wicket-keeper Sarfraz Ahmed who took a low catch to his left.

Babar was unlucky not to have Bell four overs before lunch when close-in fielder Shan Masood failed to hold on to an edge at silly point.

Bell, who survived some anxious moments in the second session, hit five boundaries in a snail-paced 199-ball knock.

The remaining two Tests will be played in Dubai (October 22-26) and Sharjah (November 1-5).