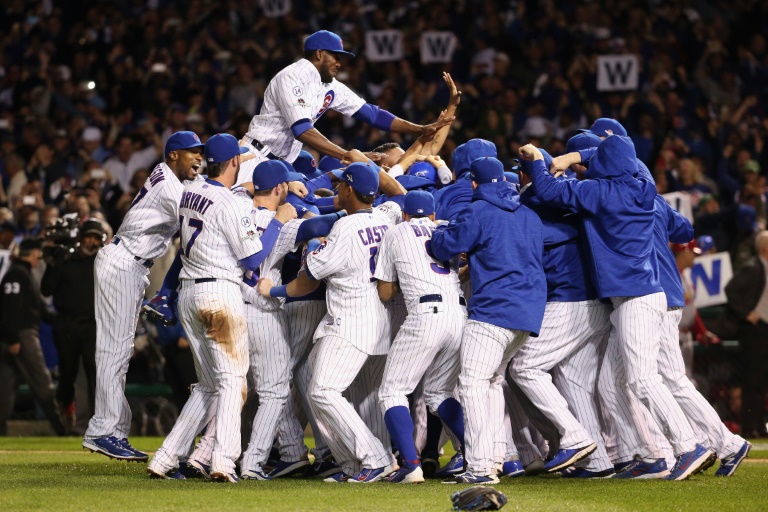 The Chicago Cubs, whose 106-season title drought is the longest in North American sports history, became betting favorites Wednesday to win baseball’s World Series as they recalled a dubious anniversary.

Westgate Sportsbook in Las Vegas installed the Cubs as 5-2 oddsmakers favorites to win this year’s World Series after they beat the St. Louis Cardinals 6-4 on Tuesday to advance to the National League Championship Series.

Since their founding in 1870, the Cubs had never before clinched a playoff series at home, and this one eliminated the season’s winningest team in Major League Baseball in the process while touching off a huge celebration.

The Cubs, who began the season at 40-1 odds to win the World Series for the first time since 1908, will play either the Los Angeles Dodgers or New York Mets in the best-of-seven National League final starting Saturday.

The move came on the 12th anniversary of one of the darkest days in the long-suffering history of the Cubs, when spectator Steve Bartman deflected a ball in the stands as Chicago left-fielder Moises Alou made a leaping attempt to grab the ball for the second out of the inning.

Until Tuesday, Chicago’s only playoff series victory since the 1908 World Series came when they beat Atlanta in the first round of the 2003 playoffs to reach the National League final against Florida.

The Cubs took a 3-2 lead in that best-of-seven series 12 years ago and were ahead 3-0 in the eighth inning when disaster struck.

Five outs from a return to the World Series for the first time since 1945, the Cubs watched a fly ball hit by Florida’s Luis Castillo just into the stands down the left-field line, where Bartman had a front-row seat. He stood and grabbed at the ball, denying Alou any chance to make the catch. Alou slammed his glove down in frustration and yelled at spectators.

Instead of a second out, Castillo walked to spark what became an eight-run eighth inning for the Marlins. As what had looked to be a historic win unraveled, fans became angry at Bartman and police took him away as spectators yelled curses and threats and threw beer and trash at him.

The 2003 Marlins went on to win the game and the series and the Cubs added another chapter to their jinx legacy, which includes a black cat running onto the field during a 1969 late-season game as the Cubs’ 9 1/2-game lead faded and the Mets rallied to reach the playoffs and win the World Series.

Cubs fans also recall the “Billy Goat” curse, in which the owner of a bar by that name, William Sianis, brought a goat to the fourth game of the 1945 World Series at Wrigley Field. They were ejected and Sianis vowed the Cubs would never win a World Series unless the goat was allowed into the ballpark.

Now the Cubs will try to set aside curses and reach the World Series for the first time since losing to Detroit 70 years ago.

For Cubs manager Joe Maddon, that means greater focus on the detail-oriented process that put Chicago into this situation.

“It’s even more important right now,” Maddon said. “I can’t emphasize this enough, the process is fearless. If you want to go out a little bit wide-eyed and worry about outcomes, you’re not going to play as good as you can.

“Don’t even worry about the score of the game. That will take care of itself. If you take care of all these smaller components, (the score) will eventually turn in your favor.”