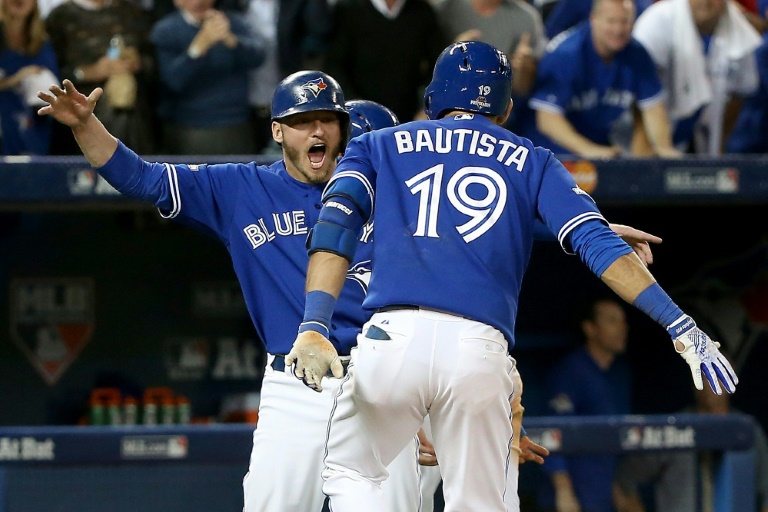 Jose Bautista smashed a three-run homer in the seventh inning Wednesday that powered Toronto over the Texas Rangers 6-3, advancing the Blue Jays in the Major League Baseball playoffs.

Toronto eliminated the Rangers three games to two in the divisional series and reached the best-of-seven American League championship series against the winner of a later game between Houston and Kansas City.

Until this year, the Blue Jays had not reached the playoffs since winning the 1993 World Series.

“Unbelievable feeling. Unbelievable energy from the fans,” said Blue Jays catcher Russell Martin, a Canadian. “This is awesome. Words can’t describe the feelings inside me.”

Trailing 3-2 in the seventh, the Blue Jays equalized when Josh Donaldson grounded into a bases loaded fielder’s choice to score the tying run.

“For intensity and emotion, it was the most emotionally charged game I have ever played,” Bautista said. “There was so much stuff going on. It was just the whole game, a do or die game. It was just the moment. I felt it. I did it. I’m just glad I was able to hit the heck out of the ball.”

Rangers leadoff batter Delino DeShields opened with a double, took third base on a Choo Shin-Soo ground out and scored when Prince Fielder grounded into a fielder’s choice.

South Korean standout Choo smashed his second career playoff homer in the third inning to put the Rangers ahead 2-0.

But the Blue Jays answered when Ben Revere scored from second on a Bautista double in the third inning and Edwin Encarnacion blasted a solo homer to equalize in the sixth.

In the seventh, Texas second baseman Rougned Odor singled, advanced to third on two ground outs and scored on one of the most bizarre plays of this or any season.

Toronto catcher Martin was throwing the ball back to pitcher Aaron Sanchez when it struck Choo’s bat as he stood in the batter’s box. The ball dribbled onto the field and Odor, realizing the ball was in play, raced home as the stunned Toronto fielders and fans looked on, umpires ruling he has scored the go-ahead run for the Rangers.

As supporters tossed bottles onto the field, the Blue Jays protested the call and the game but the decision stood, television replays showing the routine toss back to the mound deflected off Choo’s bat, an error on Martin.

“I just caught the ball and threw it back very casually,” Martin admitted. “It hit his bat and they scored. I don’t know the rule. I had never had that happen before.

Texas brought the tying run to the plate in the eighth but Toronto relief pitcher Roberto Osuna struck out Josh Hamilton and Elvis Andrus to end the inning. He also struck out pinch hitters Mike Napoli and Will Venable in the ninth for the final two outs of the game.