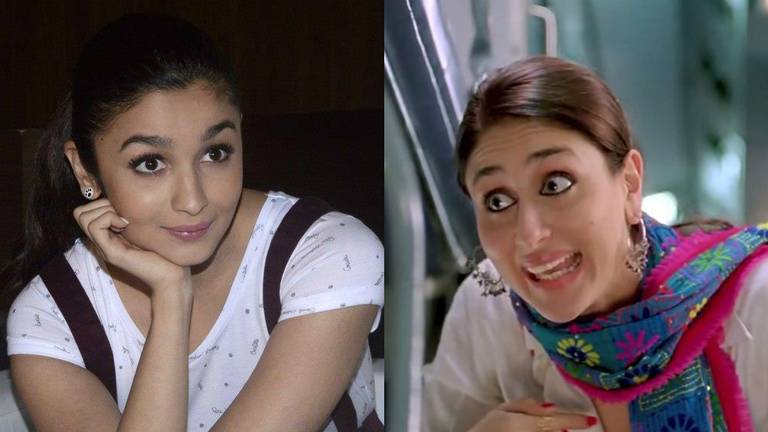 Actor Shahid Kapoor feels if there’s one actress in Bollywood who can play ex-girlfriend Kareena Kapoor’s famous character Geet from their romantic comedy “Jab We Met”, it is his “Shaandaar” co-star Alia Bhatt.

Kareena gave one of her career’s best performances in the extrovert, full of life Punjabi girl in the Imtiaz Ali-directed film.

In the trailer of upcoming Vikas Bahl movie, Alia’s character is shown as an outspoken, fun loving girl, sparking comparisons between her role and Geet. “My character, Alia, is not at all like Geet. Alia is crazy, simple and sweet. She lives in her own imaginary world. There are no similarities.

I don’t think anyone can try and play her. She is an iconic character, at least for me. And there are no similarities between ‘Jab We Met’ and ‘Shaandaar’ except Shahid,” Alia said while promoting “the movie.

The actor, however, thinks otherwise. “But if anybody could play Geet in future or a character like her than it is you Alia because you are like her. Your energy matches to Geet.”

The 22-year-old actress said, “Thank you, that’s a huge compliment for me.” This is not the first time Alia’s on screen character has been compared to Kareena’s.

Her debut role of a young style queen of her school had striking similarities to Kareena’s “Kabhie Khushi Kabhie Gham” character Pooja.

When asked if Alia prepared differently for her role in “Shaandaar” considering she plays an insomniac, the actress said, “I had to stay awake all night but at the same time look good and be focused and present there… My sister is an insomniac so I know how that person functions.

“But without taking away the difficulty from this, I will say Vikas treated it in a happy way. That’s how he works. The nights for Shahid and my character became our days. I am shown reading, eating at night and he drives away so that was nice.”