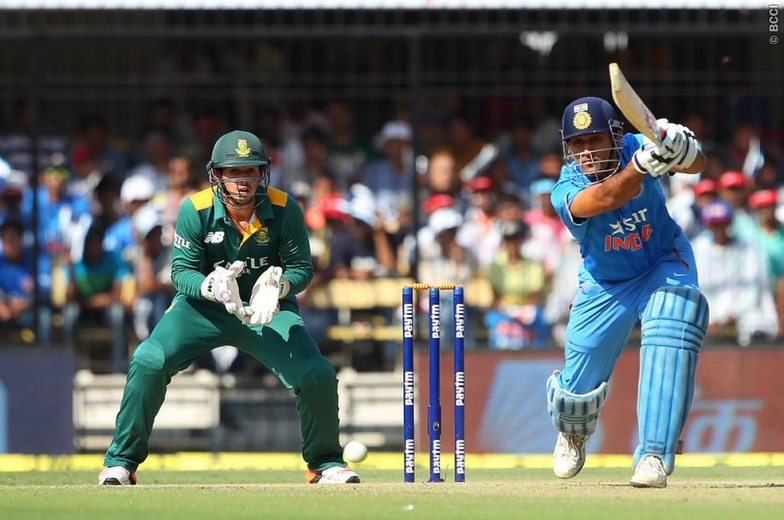 Indore: Under tremendous pressure, Mahendra Singh Dhoni produced a captain’s knock with a vintage 92 to guide India to a respectable 247 for nine against South Africa in the second cricket One-Dayer, on Wednesday.

The nudges, quick singles, shot-arm jabs, pulls, cuts, lofted shots over the bowler s head all were on full display as Dhoni answered back his critics with his knock that came off 86 balls, decorated with seven boundaries and four sixes.

‘Captain Cool’ batted with tail-enders with a calm head as India scored 82 runs off the last 10 overs to put on a board a decent total, which at one stage looked impossible.

India were 165 for seven at one stage in the 40th over but Dhoni found great support from Harbhajan Singh (22) with whom he added 56 runs to lift the side.

The hosts suffered a big setback in the form of Rohit Sharma, who was cleaned up by young paceman Kagiso Rabada the second over of the day.

Shikhar Dhawan (23) and Rahane then played cautiously to resurrect the Indian innings with a 56-run second wicket stand. With the two batsmen finding it difficult to get the boundaries after the early dismissal of Rohit, Dhawan finally broke the shackles with a splendid cover drive off Rabada in the fourth over.

Rahane was not to be left behind as he showed his class by driving on the up, cutting and flicking Morne Morkel for three boundaries in the next over.

South Africa skipper AB de Villiers introduced part-time off-spinner JP Duminy into the attack in the 12th over and Dhawan welcomed the bowler in style, pulling a loosener to the midwicket boundary.

But just when it looked Dhawan was slowly getting back his mojo, the left-hander once again gave away his wicket after getting a start. It was a soft dismissal as Dhawan chipped a slow off-cutter from Morkel straight to Duminy at short cover.

To add to India s woes, Virat Kohli s (12) unlucky run continued as he became a victim of a horrible mix up.

In the last ball of the 18th over by Morkel, Rahane was dropped by a diving Farhaan Behardein at mid-off following which the batsmen take a single. Kohli wanted a second run and sprinted back but Rahane stood his ground at the non-striker s end holding his hand up in the air and in the process both the batsmen ended up at the same end and the bails were whipped off by wicketkeeper Quinton de Kock at the other side.

A livid Kohli had no option but to leave the ground distraught, thereby paving the way for an under-pressure Dhoni to take control of the innings.

Rahane brought up his second consecutive fifty in 59 balls with a cheeky four off Morkel over the keeper s head.