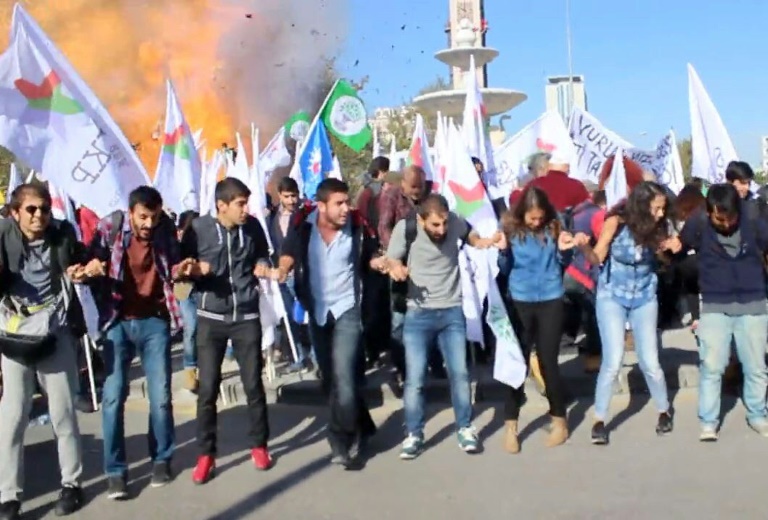 The Turkish interior ministry on Wednesday fired Ankara’s top police chief and two other officials as President Recep Tayyip Erdogan admitted security shortcomings may have led to a double suicide bombing in the capital that killed 97 people.

There has been growing anger against Erdogan and the government for alleged security lapses over the worst attack in modern Turkey’s history Saturday where two suicide bombers blew themselves in a crowd of peace activists.

Announcing the first dismissals in the wake of the disaster, the interior ministry said the chief of Ankara police Kadri Kartal as well the head of the city’s police intelligence and security departments had been sacked.

It said they had been removed on the suggestion of investigators “to allow for a healthy investigation” into the atrocity.

In his first public remarks over the bombings, Erdogan admitted there were security shortcomings but said their magnitude would be made clear only later.

“There must undoubtedly be a mistake, a shortcoming in some place. Of what dimension? This will emerge after examinations,” he told reporters late Tuesday.

With pressure growing to dismiss Interior Minister Selami Altinok, Erdogan said: “If there’s any negligence of duty, then both the prime minister and related units will take steps needed. Nobody should doubt it.”

He announced that he ordered the State Supervisory Council (DDK), an inspection body attached to the Turkish presidency, to undertake a special investigation “to handle (the attack) from a different perspective”.

Its probe will be held in parallel with the regular police and judicial investigation. The DDK has in the past probed state-sensitive issues like the death in 1993 of former president Turgut Ozal, which many regard as suspicious.

An information ministry official told AFP that two people with alleged links to the outlawed Kurdistan Workers Party (PKK) had been detained on suspicion of having prior knowledge of the attack and sharing the information nine hours prior to the attack on Twitter.

Erdogan on Wednesday made his first visit to the attack site outside Ankara’s main railway station, laying flowers for the victims alongside visiting Finnish President Sauli Niinisto.

The attack has raised political tensions to new highs as Turkey prepares for a November 1 snap election, with polarisation within the country now greater than ever.

The attack targeted thousands of people gathering for a peace rally of union, leftist and Kurdish activists criticising the government’s current offensive against Kurdish militants.

The pro-Kurdish Peoples’ Democratic Party (HDP), which lost several members in the blasts, has accused the authorities of, at the very least, severe negligence over the bombings.

In protests after the blasts, demonstrators have held up banners such as “killer Erdogan” and “we know the killer!”. The authorities have angrily ridiculed claims of state complicity in the attacks.

The government has said the Islamic State (IS) group is the prime suspect behind the attack, which also injured more than 500.

Without giving further details, Erdogan said on Tuesday that Turkey had received intelligence indicating that the Ankara attack may be linked to Syria, where IS jihadists have captured swathes of territory up to the Turkish border.

There have been growing indications that the authorities are focussing on possible parallels or even links to a July 20 suicide bombing at a peace rally in Suruc on the Syrian border that killed 34.

The government blamed IS for that attack, which also targeted a gathering of pro-Kurdish and leftist activists.

Over the weekend and on Monday, police arrested dozens of people with suspected links to IS in cities stretching from the Mediterranean resort of Antalya to the southern city of Adana.

Erdogan said the Ankara attack culprits will be brought to justice but warned “some patience is needed” as DNA tests are carried out on the remains of the two suicide bombers.

Turkey’s NATO allies have long pointed the finger at Ankara for not taking a tougher line as IS militants seized swathes of northern Iraq and Syria.

But following months of Western pressure, Turkey is now a full member of the US-led coalition against IS and allowing American jets to use its Incirlik air base for raids, potentially making it a more likely target for IS attacks.