Home World Tokyo fashion: A-bombs and equality on the runway 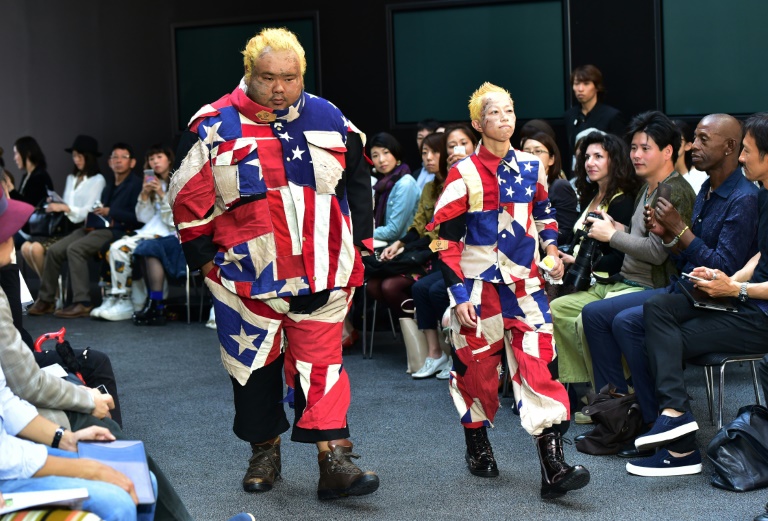 Most fashion designers try to stand out from the crowd by developing their own individual niche. Takafumi Tsuruta wants to appeal to everybody, especially those fashion often forgets.

His show Tuesday on the second day of Tokyo Fashion Week featured models from all different walks of life — throwing in ample references to nuclear weapons along the way.

On the runway, a dancer with developmental disabilities who said he effectively stopped physically ageing at 13 played “Little Boy”, the nuclear bomb dropped on Hiroshima in the closing stages of World War II.

“I am the bomb that exploded,” the model, who only gave his first name Soma, told AFP.

A few steps behind him, eating a piece of yellow cake meant to represent uranium, walked a significantly plus sized model.

He was “Fat Man”, the atomic bomb that destroyed Nagasaki three days after Hiroshima.

“The theme is 1945,” Takafumi Tsuruta told AFP, when asked to sum up his 2016 spring/summer collection.

“It is a tough subject, but I thought I can express it through fashion,” he added.

But behind his eye-raising theme was a laudably sober goal — creating clothes that better reflect real life by featuring the kind of models mainstream fashion routinely ignores.

One of those modelling Tsurata’s ready to wear “tenbo” brand was disabled comedian Yusei Terada, who wore a pair of trousers boasting a pocket near the knee for wheelchair users like himself.

Clothes were also designed for Ko Hamamatsu, a transgender model, as well as 1.15 metre (3.8-feet) tall Hitomi Goto who has achondroplasia.

“I cannot see myself, but for me, fashion is something to enjoy with others,” he told AFP.

“I can also enjoy people’s reaction to what I wear,” he added.

“It is just natural for me that there are models with different personalities,” Tsuruta, who boasts technicoloured hair, told AFP.

“You may think such a world is like a utopia, but it is the real world we live in. I want to showcase it through fashion.”

Akako Ozawa, 32, a singer with muscular dystrophy, walked down the runway with the help of a flower-decorated cane.

“When I go on a stage, I try to wear something as lovely as I can. That keeps me upbeat and helps my audience to see you can enjoy fashion regardless of one’s disabilities,” she said.

Alexandrine Naurice, a 25-year-old French woman in a wheelchair who also took part, said she supported the designer’s equality message

“As well as his will to relay the message in this tough business of fashion,” she added.