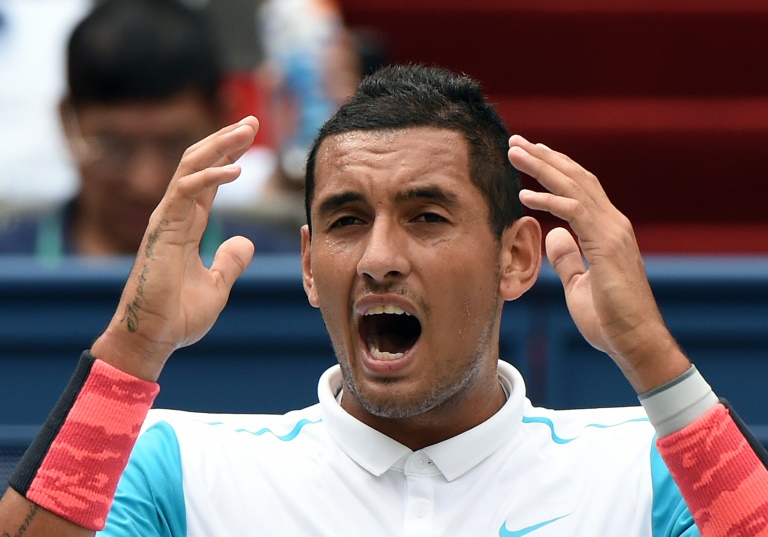 Nick Kyrgios insisted he had no concerns about being suspended from tennis after he picked up his second code violation in two matches during his Shanghai Masters defeat to Kei Nishikori on Wednesday.

The outspoken Australian snapped “That’s just crap!” as he was warned for smashing away a loose ball which nearly hit a line judge — an indiscretion that could trigger a four-week ban.

Kyrgios, who threw away a one-set lead to lose 1-6, 6-4, 6-4, was also fined $1,500 for an audible obscenity in the first round as he veers dangerously close to being suspended.

If he totals more than $5,000 in fines before February 24, Kyrgios will have to serve the suspended ban he was slapped with in August for making a sexual comment about Stan Wawrinka’s girlfriend.

But the 20-year-old — who also received a code violation at last week’s Japan Open — was unperturbed about a potential ban, even with the Australian Open Grand Slam looming at the start of next season.

“Not concerned at all. If it happens, it happens,” shrugged the world number 32, adding: “I probably shouldn’t have done it. But I didn’t think it was too bad. I don’t know, can’t really change it now.”

Wednesday’s flare-up was also not the first row between Kyrgios and umpire Mohamed Lahyani, after the Australian had to deny calling the official “dirty scum” during a match at this year’s Wimbledon.

Australian legend Rod Laver and Kyrgios’s mother were in the Shanghai crowd when, at the end of the second set, Kyrgios smacked a loose ball with a huge backhand, forcing the line judge to take evasive action.

“This for me is too dangerous, you hit it so hard,” Lahyani said, after issuing the code violation for unsportsmanlike conduct.

Kyrgios protested: “I didn’t even hit anyone but it’s unsportsmanlike? The ref wasn’t even close to it… well let’s just look at the tape because that’s just crap.”

Kyrgios repeatedly sparred with Lahyani and at one point shouted: “Water bro, water!” at a startled ball boy as Nishikori’s quietly impressive win was overshadowed by histrionics.

Kyrgios said afterwards: “I didn’t think I behaved bad at all out there today. I thought I was good mentally. I showed emotion, but at the same time I played great.”

Nishikori, who will play Kevin Anderson in the next round, said he did his best to ignore what was happening on the other side of the net.

“I mean, I heard a little bit, arguing a little bit. But I tried to stay calm and concentrate on what I have to do,” said the Japanese world number six.

World number one Novak Djokovic later said “patience is… a virtue” for Kyrgios, suggesting that Nishikori’s experience and focus had helped him win.

“I think Nick has to learn from these kind of matches, listen to the advice of the more experienced people, especially from his country, Pat Rafter, Rod Laver, all the greats that have made the history of this sport,” he said.

“I’m sure they know, they understand the kind of mental challenges he’s facing. They understand what it takes. He needs to try to really work on it, getting mentally stronger.”