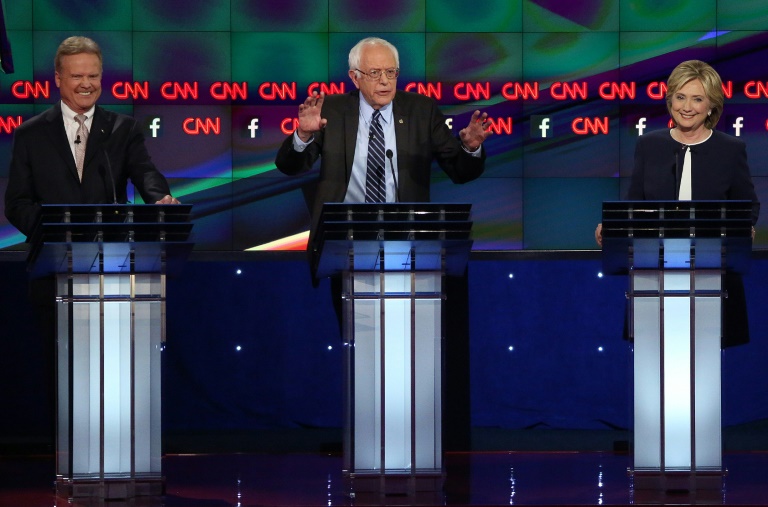 The first Democratic debate of the 2016 US presidential campaign kicked off Tuesday with frontrunner Hillary Clinton trying to draw a line under scandals that have chipped away at her support.

Here are some key moments in the debate:

CNN moderator Anderson Cooper opened the debate with a tough question for Clinton about policy flip-flops and what she is willing to do to gain power, a topic that has dogged the former first lady, secretary of State and New York senator.

“I have always fought for the same values and principles, but like most human beings, including those of us who run for office, I do absorb new information, I do look at what’s happening in the world,” Clinton shot back, with a steel that would be seen throughout the evening.

Bernie Sanders, Clinton’s nearest rival in the polls, wasted no time in displaying his leftist chops, speaking in a tone that for America’s conventional politics sounded uncompromising, bordering on revolutionary.

“Do I consider myself part of the casino capitalist process by which so few have so much and so many have so little, by which Wall Street’s greed and recklessness wrecked this economy? No, I don’t,” he said.

“I believe in a society where all people do well. Not just a handful of billionaires.”

On economics and on social issues, Clinton sought to draw sharp contrasts between Sanders’s movement politics and her own more centrist appeal.

“We are not Denmark,” Clinton told her rival, who had praised the so-called “Nordic model” of social inclusion. She did, however, concede it was sometimes necessary to “save capitalism from itself.”

Clinton criticized Sanders for not being tough enough on gun control.

“As a senator from a rural state, what I can tell secretary Clinton (is) that all the shouting in the world is not going to do what I would hope all of us want,” said the Vermont lawmaker.

– Enough of the emails –

Clinton did manage to enlist Sanders’s help in parrying questions about her use of a private email server while secretary of State.

“Enough of the emails!” said an exasperated Sanders, addressing the moderator and turning to Clinton. “The American people are sick and tired of hearing about your damn emails.

With oodles more fundraising ahead and the party base needing to be fired up, the Democratic contenders reveled in listing their chief political enemies, familiar Democratic foils ranging from the National Rifle Association to Wall Street to the pharmaceutical industry.

Clinton got perhaps the largest cheers for her list that spoke to a lifetime in the cauldron of partisan Washington: “In addition to the NRA, the health insurance companies, the drug companies, the Iranians, probably the Republicans,” she said with a smile.