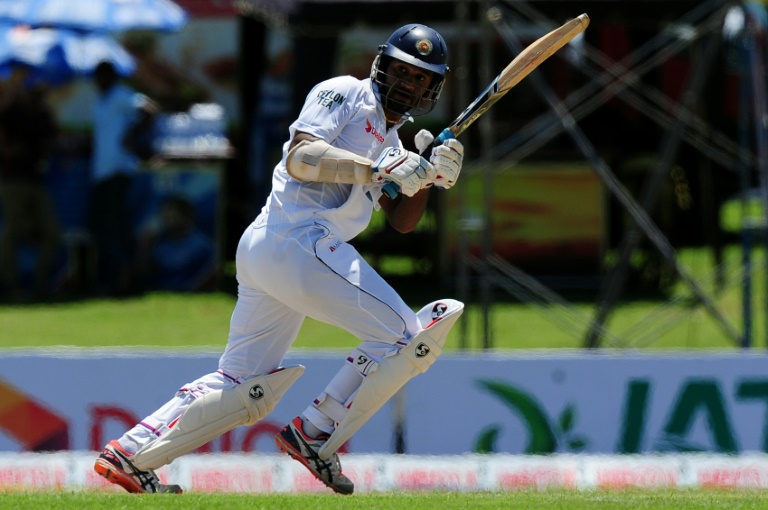 Opener Dimuth Karunaratne scored his third Test century and made the West Indies bowlers toil in sweltering conditions as Sri Lanka finished on 250 for two at stumps on the opening day of the first Test Wednesday.

Karunaratne was unbeaten on 135 along with Dinesh Chandimal who has so far made 72 in an unbroken stand of 149 at the Galle International Stadium on Sri Lanka’s south coast.

Playing in his 22nd Test match, Karunaratne laid the foundations for a formidable first innings score for the hosts on a pitch which is expected to favour spin in the latter stages of the game.

Karunaratne was steady throughout the day although he began to play more expansively in the closing session. He reached his century in spectacular style by lofting Devendra Bishoo over mid-wicket for his only six of the day.

After Sri Lankan skipper Angelo Mathews won the toss and chose to bat, Karunaratne vindicated that decision by putting on 56 for the first wicket with Kaushal Silva while frustrating the West Indies fast bowlers for 17 overs.

Silva, who was tested by some probing fast bowling from Jerome Taylor and Kemar Roach in the first hour, fell before lunch when he edged to Denesh Ramdin off Roach for 17.

Vice captain Lahiru Thirmanne was next to go when he mistimed a lofted shot over mid wicket to be snapped up by the substitute fielder Rajendra Chandrika off Bishoo.

His dismissal continued a run poor form and he never looked comfortable during his 62-ball innings, hitting just one boundary in his score of 16.

It was otherwise hard going for the West Indies bowlers who frequently teased the batsman outside off stump.

Jerome Taylor was particularly unlucky to go wicketless and the visitors’ fielding wilted under pressure as the humid day progressed.

Thirimanne and Chandimal were both dropped, the latter when he was only on 11 as Taylor failed to hang on while backpedaling near the boundary.

West Indies used seven bowlers with the spinners Marlon Samuels and Bishoo bowling 40 overs between the two of them.