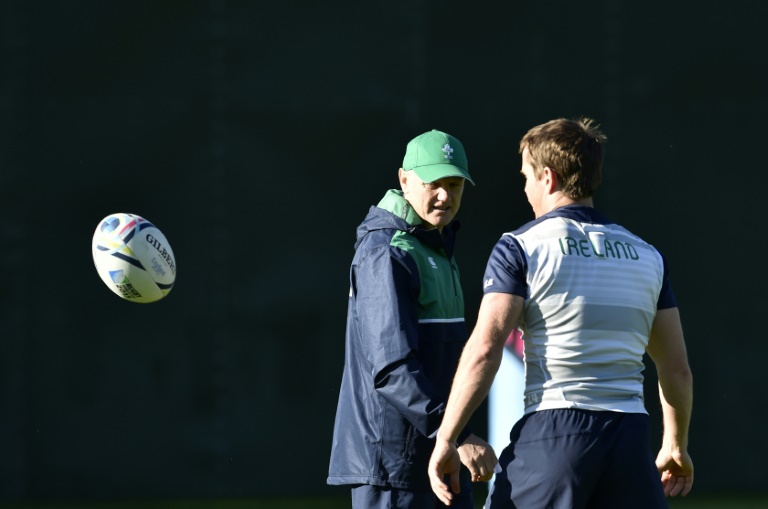 Ireland coach Joe Schmidt will have to rejig his team for the World Cup quarter-final against Argentina with injury and suspension ruling out three players doubts remaining over Jonny Sexton.

A moment of madness in the opening seconds of the 24-9 victory over France by Sean O’Brien came back to haunt the star flanker Tuesday.

His suspension was a further blow to an Ireland team that suffered injuries to two key forwards in the brutal win over the French.

Their news followed the withdrawal of influential centre Jared Payne, who returned home last week with a foot fracture.

There are also doubts over playmaker Sexton, who is struggling with a groin injury which forced him off in the first-half of the pool game which saw the Irish seal top spot and avoid a last eight meeting with defending champions New Zealand.

Ireland called up Mike McCarthy and Rhys Ruddock as replacements for O’Connell and O’Mahony, but there has as yet been no back-up flown in to cover Payne.

The back three options Schmidt has should be adequate for the Argentina game at Cardiff’s Millennium Stadium on Sunday.

While Schmidt and his coaching staff will be scratching their heads going through the possible line-ups, prop Jack McGrath said the wider Irish squad were prepared for injury-led disruption.

“In the November internationals I think there were 12 injuries and guys have stepped up,” McGrath said.

“That’s just the way it is.

“Even in the bigger squad of 50 during summer training we knew that players would have to be used eventually so everyone is on the same page.”

No 8 Jamie Heaslip will likely take over the captain’s armband from O’Connell, who is due to undergo an operation this week.

“We’re lucky we’ve got a big senior players group, we’re a pretty experienced side and most of us have been around the block a bit,” Henry said.

“Jamie has done a terrific job and we’ve got leaders throughout the team who are ready to step up to the plate.”

Henry added that there was an added incentive after losing players to injury.

“There’s a bit,” he said. “The players that are here, we know we’ve a chance of making history this weekend – that adds to the pressure but in the past two years we’ve risen to the pressure.”