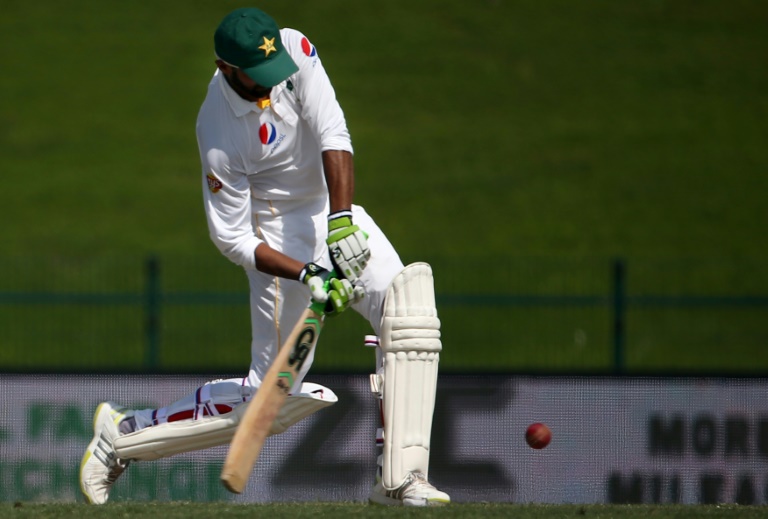 Openers Alastair Cook and Moeen Ali batted solidly to take England to 56-0 after Shoaib Malik’s double century lifted Pakistan to a mammoth total in the first Test in Abu Dhabi on Wedensday.

Cook was unbeaten on 39 and Ali 15 not out as England trailed by 467 runs in reply to Pakistan’s first innings of 523 for eight declared after day two at Sheikh Zayed Stadium.

England’s batsmen will have to dig deep to thwart Pakistan’s attack on a pitch that did not favour the bowlers on the first two days but could change its nature as the game progresses.

Ali survived a confident leg-before appeal and the subsequent review when left-arm paceman Rahat Ali brought one in sharply to hit the pads but Australian umpire Paul Reiffel gave the batsman not out.

It was a day to remember for Malik as he capped his return to the Test side after a gap of five years with an epic knock of 245, his best score in Test cricket, after coming in to bat in the third over of the match on Tuesday.

“It was challenging. First it was my comeback then I came to the crease in only the third over but I had the resolve and the confidence to do well and that helped me throughout my innings,” said Malik, who had treatment for dehydration after his 647-minute vigil.

Asad Shafiq, who scored 107 for his ninth hundred, added 248 runs with Malik as Pakistan added 213 runs in the two sessions after resuming the day at 286-4.

Malik hit 24 boundaries and four sixes during his 420-ball knock before he smashed a Ben Stokes delivery straight to Ian Bell, who took a well-judged catch at midwicket.

Malik steered paceman James Anderson towards third man for two to complete his double hundred off 367 balls. He took off his helmet and bowed down on the turf in celebration.

Shafiq completed his century with a sweep boundary off leg-spinner Adil Rashid as the pair erased the previous best fifth-wicket stand in Pakistan v England Tests of 219 set by Paul Collingwood and Eoin Morgan at Nottingham in 2010.

Shafiq went soon after tea, when he was trapped leg before wicket off seamer Mark Wood while Sarfraz Ahmed (two) and Zulfiqar Babar (nought) also fell to Stokes.

Stokes was England’s most successful bowler with 4-57 while Anderson took 2-42.

Stokes admitted it was hard work in the field.

“It was tough. I think all the bowlers stuck to the task very well and we did not get much assistance from the pitch or in the air but credit to Pakistan’s batsmen for playing well,” said Stokes.

Earlier, Malik resumed at 124 and hit a four and six off wicket-less Rashid before smashing a boundary off seamer Wood to better his previous best score as well as completing 150.

His previous best of 148 not out came against Sri Lanka in Colombo in 2006.

Both Malik and Shafiq made the England bowlers toil in the first two sessions and rue the two chances they failed to grab against the two batsmen.

Malik was caught off a Stuart Broad no-ball on 40 and Shafiq was let off by Bell off Anderson when on 10 — both on Tuesday.

Both England’s spinners — debutant Rashid and Moeen Ali — failed to make an impact on a pitch which is expected to take turn as the game progresses.

Rashid, who was hit for three sixes by Malik, went wicketless in his 34 overs, conceding 163 runs — the worst figures in an innings on debut.