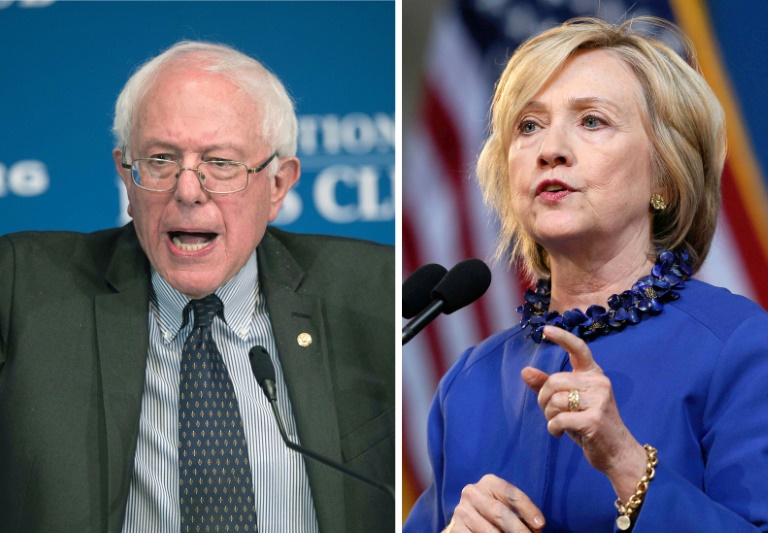 Democratic presidential frontrunner Hillary Clinton will finally square off with top rival Bernie Sanders on Tuesday in the partyâ€™s first debate of the 2016 campaign as she seeks to prove she is the candidate to beat.

Clinton will take center stage in Las Vegas with Sanders, an independent senator from Vermont who has drawn huge crowds on the campaign trail, and three other hopefuls seeking to make their mark with a national audience.

Vice President Joe Biden has been mulling a run for months, and is the wild card of the Democratic race. But he has not announced his decision and is not expected to participate in the debate, which starts in Sin City at about 6:00 pm (0100 GMT Wednesday).

The spotlight therefore is likely to be on Clinton and Sanders.

While there is unlikely to be a dramatic clash of personalities as seen in the first two Republican debates, the former secretary of state will no doubt face pressure from the upstart senator in their much-anticipated encounter.

The 67-year-old Clinton is nearly eight years removed from her campaign clashes with ultimate White House winner Barack Obama, and part of her goal will be to show she still has expert debate skills even though she appears to struggle to personally connect with voters.

“Tonight I’ll walk on stage at the first Democratic debate in Las Vegas and present our plans and ideas for this country — the same plans and ideas I’ve been talking about with Americans every day since we launched this campaign,” Clinton told supporters in a fundraising email early Tuesday.

Besides focusing on her proposals for gun control, Wall Street regulations and other policies, Clinton will want to prove that she can be the first woman to win the White House, despite a recent downward trend in her poll numbers.

Clinton still leads nationally in polls, but she trails Sanders by nearly 10 points in New Hampshire and holds only a modest lead in Iowa, both key early-voting states.

Her lead increases in debate state Nevada, where her support has reached 50 percent compared to 34 percent for Sanders and 12 percent for Biden, according to a CNN/ORC poll released Monday.

While Clinton still elicits more unfavorable than favorable reactions among US adults (49 percent to 47 percent), she is far more popular than Sanders among Democrats, who view her favorably by 79 to 19 percent, compared to Sanders’ 47-24 percent split, a Washington Post-ABC News poll out Tuesday shows.

For Sanders, a rumpled, self-declared democratic socialist, Tuesday night will be the biggest test of his decades-long political career.

Clinton has rarely mentioned Sanders on the campaign trail, but they will be standing a few feet apart on the debate stage.

While Sanders said he is unlikely to level “personal attacks,” he suggested he will hit Clinton on her recent position shifts, including her opposition to the Canada-to-US Keystone oil pipeline and her criticism of a huge Pacific Rim trade deal that she supported on multiple trips to Asia.

“People will have to contrast my consistency and my willingness to stand up to Wall Street and corporations with the secretary,” Sanders told NBC’s “Meet the Press” Sunday.

The Sanders campaign telegraphed another line of attack over the weekend by releasing a statement outlining Sanders’s 2002 vote against authorizing the use of force in Iraq sought by George W. Bush, which Clinton voted for.

Obama opposed the war, and his difference with Clinton on the matter marked a defining issue in their 2008 showdown. Clinton has since acknowledged she was wrong to cast that vote.

Seeking her own opening, Clinton might use her rival’s moderate position on guns — Sanders hails from Vermont, a rural state with few firearm restrictions — to highlight an area where liberals who seek tighter gun laws break with Sanders.

Sanders casts himself as the anti-billionaire candidate intent on reshaping an economic system he says rewards the wealthiest Americans while leaving millions mired in poverty.

Clinton will likely face questions about her use of a private email account and server while secretary of state, an issue that has dogged her for months.

She got little help from Obama shortly before the debate.

The president told CBS’s “60 Minutes” program in an interview aired Sunday that while the scandal was largely “ginned up” by campaign politics, Clinton “made a mistake” using personal email and “could have handled the original decision better, and the disclosures more quickly.”