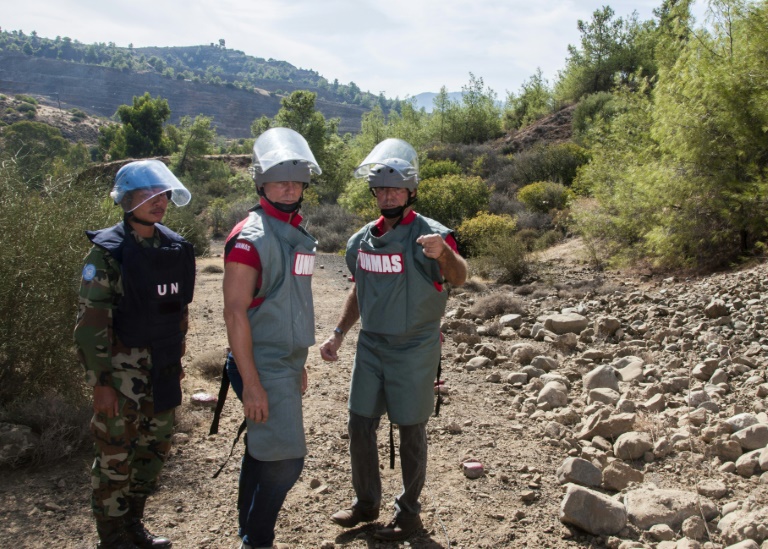 Daniel Craig’s latest mission has taken him to Cyprus but not as super spy James Bond, as a UN advocate for the elimination of landmines.

The 47-year-old British actor — best known for his role in the 007 series — was visiting the divided Mediterranean island on his first mission since being named the UN’s Global Advocate for the Elimination of Mines and Explosive Hazards in April.

Coming less than two weeks before the release of the latest Bond blockbuster “Spectre”, Craig’s two-day visit saw him watching deminers at work in an active minefield.

“I very much hope that I will be the first and last Global Advocate to see landmines on this beautiful island,” he was quoted as saying in UN statement.

Cyprus has been divided since 1974, when Turkey invaded and seized its northern third in response to a Greek-backed military coup to join Nicosia with Athens.

A new peace process kicked off in May in an effort to end the island’s decades-long division.

Over the last decade, deminers have removed more than 27,000 landmines from the island’s UN-controlled buffer zone. Most are remnants of the 1974 Turkish invasion when hundreds of mines were strewn across the island’s battlegrounds.

Craig on Monday witnessed “first-hand the difficult and risky work involved in manual demining and explosive ordnance disposal by the UN peacekeepers,” the UN said.

It is estimated that thousands of landmines still remain in Cyprus and large areas of land could still be contaminated by unexploded ordnance.

Having filmed years ago in landmine-afflicted Cambodia, Craig was impressed to see Cambodian deminers offering their expertise in Cyprus.

“For these peacekeepers to take their expertise, gleaned over the last 40 years in Cambodia, and make it available to the people of Cyprus, half-way around the world, is truly inspiring,” the actor said.

“Witnessing the potential impact that mines can have on people and communities, years after the end of conflict, brings home the humanitarian importance of the UNâ€™s demining efforts in Cyprus,” he added.

The latest Bond film starring Craig is to be released in Britain and Ireland on October 26 before a worldwide release on November 6.