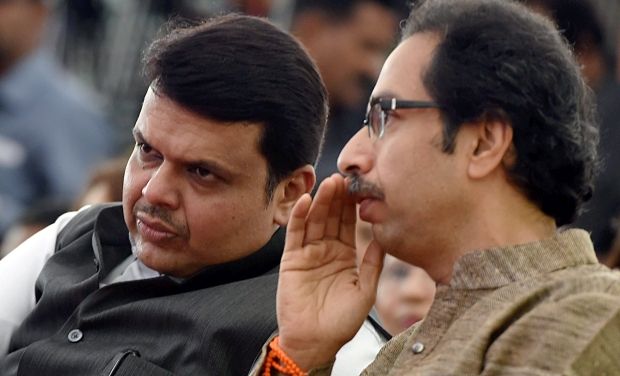 Amidst signs of growing fissures between the two allies in Maharashtra, the BJP-led state government will discuss the “probability of snapping ties” with the Shiv Sena after it asked BJP to opt out of coalition government if they have any problems with their ally.

The “probability of snapping ties” with the Shiv Sena would be discussed in a joint meeting of BJP ministers and party functionaries tomorrow, a top BJP leader has said.

According to the party functionary, BJP wants the Shiv Sena to “quit” from power. On the contrary another senior BJP leader has said that Sena would not “dare” to take the extreme decision.

Meanwhile, a Shiv Sena leader here termed the idea of quitting as “rumours” and said it will continue to be in power.

The official agenda of the October 15 meet is the Devendra Fadnavis government’s one year in power, its achievements and ways of celebrating it.

“Five major achievements from each portfolio will also be finalised in the meeting. There are other issues to be discussed as well,” BJP spokesperson Madhav Bhandari said, even as he denied any discussion on the Uddhav Thackeray-led party in tomorrow’s meeting.

Another party leader who will be part of the October 15 meeting, claimed that the BJP feels “suffocated” with the Sena’s behaviour towards it.

“Though Sena is a part of the BJP government, both at Centre and in the state, it has not wasted even a single opportunity to criticise Prime Minister Narendra Modi, party president Amit Shah and the BJP,” the leader said, requesting anonymity.

He further claimed that in the last few days, Sena has tried to “blackmail” the state government over Pakistan singer Ghulam Ali and former Foreign Minister of Pakistan Khurshid Kasuri (over their engagements in the city).