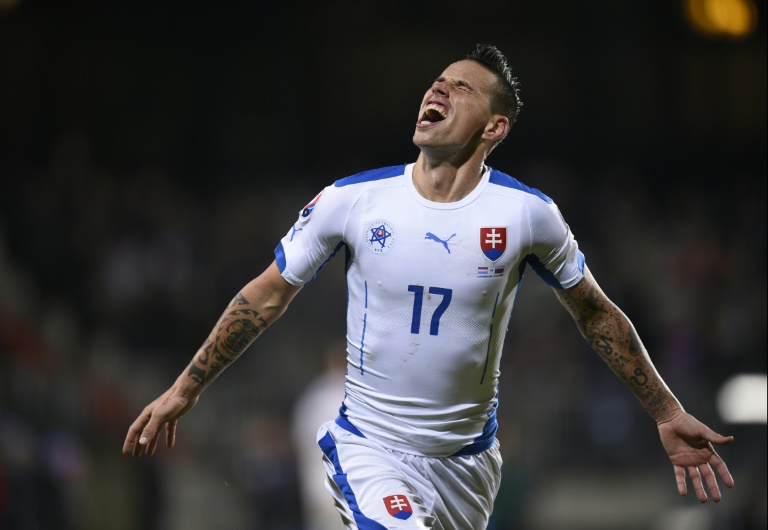 Russia and Slovakia clinched qualification for Euro 2016 on Monday as reigning continental champions Spain and England both ended their campaigns with victories.

Russia’s turnaround in form under Leonid Slutsky continued as they beat Montenegro 2-0 in Moscow to take the second automatic qualifying spot in Group G behind Austria and condemn Sweden to a play-off.

The veteran right-back Oleg Kuzmin scored his first international goal to put Russia ahead in the 33rd minute at the Otkrytie Arena and Aleksandr Kokorin converted a penalty shortly after following a foul on Dmitri Kombarov by Vladimir Rodic.

It was a fourth straight win for the 2018 World Cup hosts since Slutsky replaced the sacked Fabio Capello and ensured that Russia would finish ahead of Sweden, despite their 2-0 victory at home to Moldova.

“My men were really great. They’ve got our team out of trouble in an almost dead-end situation in this campaign,” said Slutsky.

Zlatan Ibrahimovic put Sweden ahead in Solna with his 59th international goal and eighth in eight qualifiers before Erkan Zengin doubled their lead shortly after the interval.

But Erik Hamren’s team must come through a two-legged play-off next month if they are to qualify for a fifth successive European Championship finals.

Elsewhere in Group G, Marko Arnautovic scored once and Marc Janko netted a brace as group winners Austria signed off with a 3-0 defeat of Liechtenstein in Vienna.

Meanwhile, Slovakia won through to a European Championship finals as an independent nation for the first time thanks to a 4-2 win in Luxembourg that guaranteed them second place in Group C behind reigning champions Spain.

Slovakia came into the final round of qualifiers level on points with Ukraine but knew a win at the Stade Josy Barthel would be enough and they were quickly 3-0 up thanks to goals by Marek Hamsik, Adam Nemec and Robert Mak.

Mario Mutsch pulled one back just after the hour and then Lars Gerson netted a penalty for the hosts, but Napoli star Hamsik made sure of the win in stoppage time.

In any event, Slovakia would have qualified even in defeat as Ukraine lost 1-0 at to Spain in Kiev.

At the venue where they beat Italy in the Euro 2012 final, it was an unfamiliar-looking Spain side that won thanks to a debut goal by Villarreal full-back Mario Gaspar midway through the first half.

Cesc Fabregas captained the side as he won his 100th cap but, with his Chelsea manager Jose Mourinho watching from the stand, his evening was marred when his penalty was saved by Andriy Pyatov in the 25th minute.

Spain had already won the group, while the defeat for Ukraine means they go into this weekend’s draw for the play-offs.

As a result, Hungary are poised to qualify as the best third-placed team, barring an unlikely sequence of results in Group A on Tuesday. Turkey could pip the Hungarians, and thus avoid a play-off, by beating Iceland to clinch third place in Group A, but only if Latvia lose at home to Kazakhstan.

England had already qualified from Group E but they made it a perfect 10 wins from 10 to end their campaign as Roy Hodgson’s team eased to a 3-0 victory over Lithuania in Vilnius.

Ross Barkley’s deflected shot put England ahead before Lithuania goalkeeper Giedrius Arlauskis unluckily deflected Harry Kane’s shot into his own net for the second and Arsenal’s Alex Oxlade-Chamberlain struck after the interval.

“This is an achievement. I am very proud of the players’ performances,” Hodgson said.

“The quality of play was good and 10 wins out of 10 is very satisfying. We’ve got to take a lot of pride in that,” added Hodgson, whose Lithuanian counterpart Igoris Pankratjevas announced his resignation post-game.

Already-qualified Switzerland won 1-0 in Estonia thanks to Ragnar Klavan’s injury-time own goal, while Slovenia confirmed third place and a play-off berth by winning 2-0 in San Marino with Bostjan Cesar and Nejc Pecnik on target.

The final qualifiers will be played on Tuesday when, along with the best third-placed side, one other berth at the finals in France will be decided between Norway and Croatia in Group H.