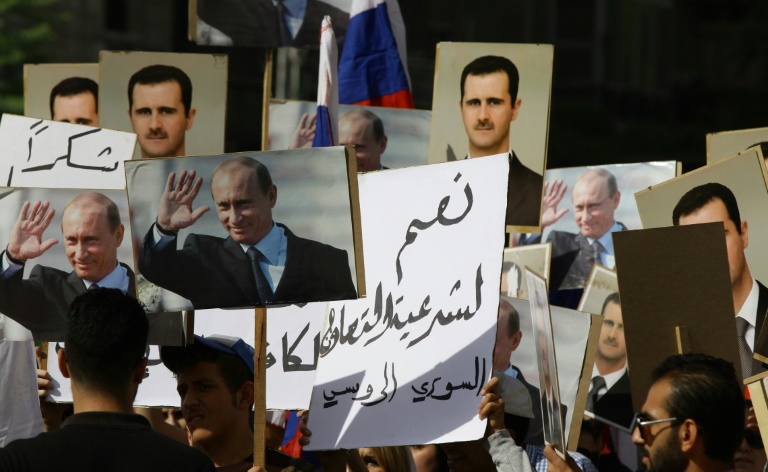 Moscow said Tuesday it had carried out its most intense day of air raids yet in Syria, as jihadists called for revenge attacks and rockets hit the Russian embassy in Damascus.

With Russia’s involvement having an increasingly dramatic effect on Syria’s conflict, President Vladimir Putin slammed Washington for refusing to cooperate with Moscow.

The defence ministry in Moscow said Russia’s air force had hit 86 “terrorist” targets in Syria in the past 24 hours, in the highest one-day tally since it launched its bombing campaign on September 30.

The ministry said it had hit several positions of the Islamic State group, which Russia insists it is targeting in the air campaign.

Washington and its allies — who are carrying out their own air war against IS in Syria and Iraq — have accused Moscow of targeting Western-backed moderate rebels and seeking to prop up the regime of President Bashar al-Assad, a longtime Russian ally.

Putin hit back at the West, criticising Washington for refusing to share intelligence with Russia on Syria and accusing it of muddled thinking.

“I think some of our partners simply have mush for brains, they do not have a clear understanding of what really happens in the country and what goals they are seeking to achieve,” he said.

He pledged that Moscow’s air war would have dire consequences.

“The war in Syria will make the Russians forget the horrors that they found in Afghanistan,” Jolani said.

Russia’s embassy compound in Damascus was struck by two rockets on Tuesday, sparking panic among some 300 demonstrators waving Russian flags and pictures of Putin in support of Moscow’s intervention.

The Britain-based Syrian Observatory for Human Rights said the rockets were fired from the eastern edges of the capital, where Islamist rebels are entrenched.

“Two rockets hit embassy territory at 10:15 am. No one was killed or wounded,” Russian news agency Interfax quoted an embassy official as saying.

Foreign Minister Sergei Lavrov told reporters in Moscow it was an “act of terror”.

On Tuesday he was meeting the UN’s Syria envoy Staffan de Mistura in Moscow for the first time since the Kremlin launched its campaign.

Efforts at reaching a diplomatic solution to Syria’s conflict have repeatedly failed, despite the deaths of more than 240,000 people and millions being forced from their homes since the conflict erupted in March 2011.

The fighting has intensified in recent weeks, with regime forces making gains with Russian support.

The Observatory said fighters with Lebanese Shiite movement Hezbollah — which also supports Assad — arrived in the strategic Sahl al-Ghab plain to reinforce a regime offensive there.

Sahl al-Ghab, at the intersection of Hama, Latakia and Idlib provinces, has been a major target for Russian air strikes.

Thousands of fighters and supplies from Iran — another key Assad backer — had also reached Hmeimim airport in Latakia province, the Observatory said.

A powerful rebel alliance that includes Al-Nusra — the Army of Conquest — announced the launch of a major offensive of its own to take the central province of Hama.

It called on fighters in Hama “to light the fire on the fronts inside the regions, so that hordes of Muslims will meet in Hama as liberators.”

Fierce fighting in the key village of Kafr Nabuda in the province forced pro-regime forces to retreat and killed 25 of them, the Observatory said.

Washington has been increasing support for rebel groups it backs in Syria and they said Tuesday that American-made anti-tank missiles were turning the tide in a major battle in the country’s centre and northwest.

Non-Islamist opposition factions say they are using the US-made TOW missiles to halt a Syrian army advance that is backed by Russian air strikes in the provinces of Hama and Idlib.

“These rockets have played an important role in stopping the fierce attack by the Syrian regime and its Russian ally,” said Asaad Hanna, spokesman for the non-Islamist Division 101.

“We are using the (TOW missiles) more now to turn up the heat on the front lines.”