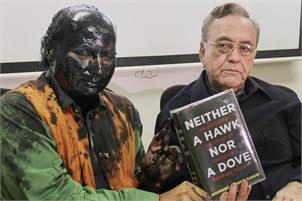 Unfazed by the criticism for blackening the face of Sudheendra Kulkarni, Shiv Sena today went one step ahead and likened him to 26/11 terror attack convict Ajmal Kasab, saying India does not face as much threat from terrorists as it does from people like him.

The Sena said it will not change its stand against Pakistan, however, much it is criticised and maligned.

“As soon as Sudheendra Kulkarni’s face was blackened, he immediately put his photos on social networking sites and alleged that the Sena was behind the attack. We agree with his allegations. Being patriotic and securing our country is Maharashtra’s work and we are doing our work,” the Sena said in an edit in party mouthpiece ‘Saamana’.
“The real threat to the sovereignty of our nation is not due to extremists or terrorists, but people like Kulkarni.
People like him are out to cut the neck of our nation…When there are people like him present here, Pakistan does not need to send people like Kasab for terrorist activities,” it said.

“An atmosphere has been created where it now seems that Khurshid Kasuri is a messenger of peace or a Mahatma and the Sena has committed a crime by opposing him. However, much we are criticised or maligned, we will not change our stand against Pakistan,” it said.

“It would have been better if the security provided for Kasuri was used to protect the citizens of Mumbai. They (the government) only stopped short of calling the army to protect him. Who is this Kasuri? Today, he speaks a different tone but while he was in government, he was instrumental in bringing all separatists together against India,” it added.

“Some people want Indians to fight among themselves and people like Kulkarni are doing their bit in fulfilling this agenda. It was the same Kulkarni who spoke about barrister Jinnah and dug BJP’s grave, and in 2008 during the vote of confidence, he caused BJP’s head to hang in shame due to the cash-for-votes scandal. Kulkarni had to face jail and L K Advani got into deep mess because of him,” the edit said.

The Sena also asked Chief Minister Devendra Fadnavis to be alert against “Pakistani agents” like Kulkarni.