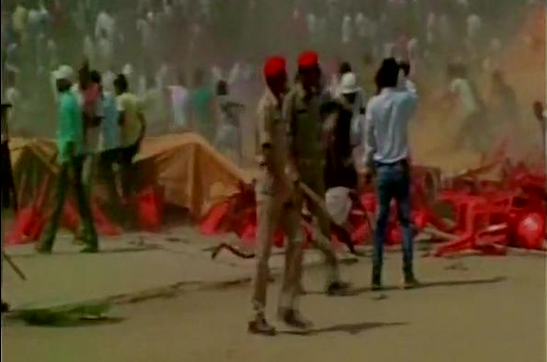 Biharsharif: Around 12 people, including some policemen, were injured as police resorted to lathicharge to quell a stone-pelting crowd which grew restive due to late arrival of Bollywood actor star Ajay Devgan at a poll rally here.

Superintendent of Police Vivekanand Kumar said, a big crowd had gathered at the ground which became unmanageable with no sign of the actor who finally came around 1 PM instead of the scheduled 10:30 AM.

As the crowd vented ire by throwing chairs and stones on policemen, police resorted to lathicharge and at least a dozen people, including some policemen, were injured in the ensuing melee, he said.

The actor, who was supposed to address the meeting for BJP candidate Sunil Kumar, finally waved at the crowd from the helicopter and did not land, the SP said.

Earlier, unruly scenes were witnessed at the programme of Ajay Devgn at Lakhisarai and Khagaria as well.

Biharsharif is the headquarters of Nalanda district which is the native place of Chief Minister Nitish Kumar.

BJP has fielded Sunil Kumar from the seat after he quit JD(U) and joined the saffron party.