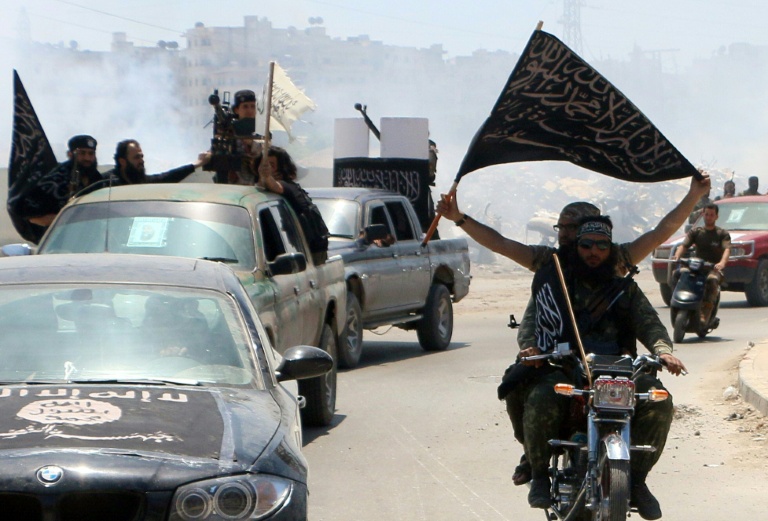 Al-Qaeda’s Syrian affiliate called for jihadists to attack Russia over its air strikes in Syria, as rockets hit Moscow’s Damascus embassy Tuesday where demonstrators had gathered to back the intervention.

He pledged that Moscow’s air war, which began on September 30, would have dire consequences.

“The war in Syria will make the Russians forget the horrors that they found in Afghanistan,” Jolani said, adding: “They will be shattered, with God’s permission, on Syria’s doorstep.”

Russia has said its raids are targeting Al-Nusra’s jihadist rival IS and other “terrorist” groups.

Jolani urged armed opposition groups to shelve their differences until both air campaigns had been defeated.

“Delay the disputes until the demise and smashing of the Western Crusader and Russian campaign on Syrian land,” he said.

Jolani also called on armed groups to “hurl hundreds of rockets” daily at villages inhabited by the Alawite minority, the sect from which President Bashar al-Assad hails.

Jolani said he would pay “three million euros ($3.4 million) for anyone who can kill Bashar al-Assad and end his story”.

“How long must Muslims delay their rights and shed their blood for a man who loves his power?”

He said he would pay the bounty even if a member of Assad’s own family killed him.

Two rockets slammed into the complex as the demonstrators waved Russian flags and pictures of Russian President Vladimir Putin.

The Syrian Observatory for Human Rights said the rockets were fired from the eastern edges of the capital, where Islamist rebels are entrenched.

It also said supplies and thousands of Iranian fighters had reached Hmeimim airport in Latakia province, where all civilian flights have ceased and which is now used for military operations only.

Elsewhere on the ground, the Observatory said fierce overnight fighting in the key village of Kafr Nabuda in the central province of Hama forced pro-regime forces to retreat and killed 25 of them.

It also said Hezbollah fighters arrived in the strategic Sahl al-Ghab plain to reinforce the regime’s offensive there.

Sahl al-Ghab at the intersection of Hama, Latakia and Idlib provinces has been a major target for Russian air strikes.

On the Golan, Israel responded to two stray rockets from Syria by targeting two regime military posts, without specifying if they were hit.

Israel warned it would not tolerate rockets fired across the border, “intentional or not”.

It said destruction it had examined was not caused by fighting, but was part of “a deliberate, coordinated campaign of collective punishment of civilians in villages previously captured by IS, or where a small minority were suspected of supporting the group”.