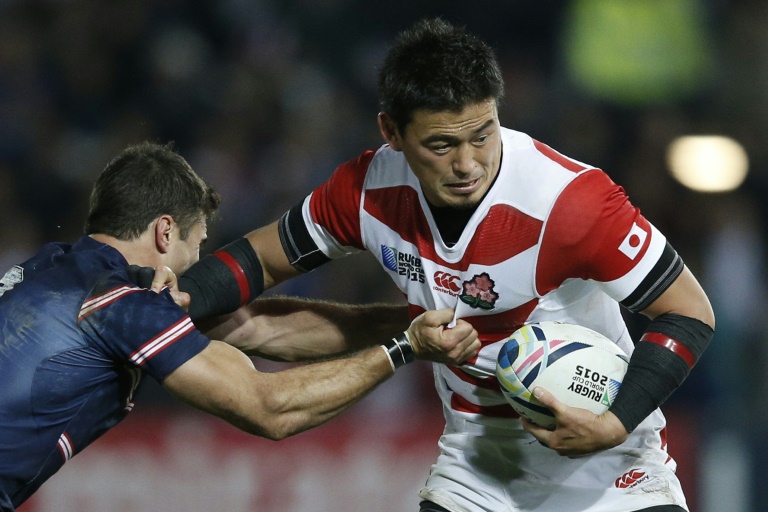 Not that many people, even inside Japan, had heard of Ayumu Goromaru before the World Cup started.

Yet by the end of the pool phase the Japan fullback was a national hero and a name known to rugby fans across the globe.

The 29-year-old ‘Goro’ burst in on the big boys party on the first weekend of the tournament when Japan, staggeringly, beat two-time world champions South Africa 34-32.

In a finish that owed more to a Hollywood movie than received rugby wisdom, Japan held their nerve to press for a game-clinching try — scored after several remarkably composed phases in stoppage time by Karne Hesketh — rather than opt for an equalising penalty.

“We may have changed the history of rugby by beating South Africa in our first game,” said Goromaru, who kicked 24 points in the match. The victory did wonders for the sport in Japan, who will host the next World Cup in 2019.

“It sets us up very well commercially for that (2019) World Cup and beyond and it is great for the growth of rugby because all that money will be invested in the game in Japan,” said World Rugby chief executive Brett Gosper.

And the greatest upset in Rugby World Cup history was no flash in the pan. Japan also beat Samoa and the United States, only to become the first side in World Cup history to win three pool matches but not qualify for the knockout stages.

That was essentially because of a recurring problem at the World Cup, namely a congested fixture schedule for so-called lesser nations.

Just four days after their immense effort in seeing off South Africa, Japan lost 45-10 to Scotland who eventually went through on the back of that result after they too won three of their four Pool B fixtures.

Nevertheless, it was hard to disagree with outgoing Japan coach Eddie Jones whosaid: “If we win three games we will end up team of the tournament.”

Fiji were even harder hit by being placed in a lopsidedly strong ‘Pool of Death’ also featuring England, Australia and Wales. The Pacific islanders — who knocked the Welsh out of the 2007 World Cup — were forced to play all three major teams in the ludicrously short space of 13 days.

Both Japan, with former Wallaby boss Jones at the helm, and Fiji, with widely-travelled New Zealander John McKee in charge, benefited from the input of top-class coaches.

World Rugby, the global governing body, helped supply the tier two nations with 106 backroom staff and the input was visible as the likes of Georgia, under the guidance of Kiwi coach Milton Haig, beat Tonga.

Romania, with veteran Welshman Lynn Howells in charge, upset the odds to come from behind to defeat Canada. None of the little rugby nations suffered the 100-point plus scores which been a feature of previous World Cups marring this edition.

But the perennial question of what happens to emerging nations between World Cups remains.

“There is no easy solution,” Mark Egan, World Rugby’s development manager, told the Sunday Times. “We would love more games, but we also understand the realities of the professional game.”

Howells, after seeing Romania push Italy close before losing 32-22 on Sunday, said: “I just hope it is not four years before we play a tier one nation again.”

The attendance record for any World Cup match was broken by two huge crowds at London’s Wembley Stadium, England’s football home, with 89,019 piling in for New Zealand’s win against Argentina before 89,267 witnessed Ireland’s victory over Romania.

In the midst of joyous scenes at grounds up and down the country — Japan became a particular hit at Gloucester’s Kingsholm as they too play in Cherry and White — it was almost possible to forget that England became the first host nation to bow out of a World Cup in the pool phase.

Almost but not quite, as England added to everyone’s enjoyment as bizarre tales of management bonding exercises involving horses and players being put through police riot training emerged from their camp.

“The best way to bond is when you go out to the pub, have a drink and break down barriers,” said England back-row Billy Vunipola.

Instead it was left to England fans, drowning their sorrows, and supporters from around the world to put Vunipola’s ‘old-school’ advice into action.