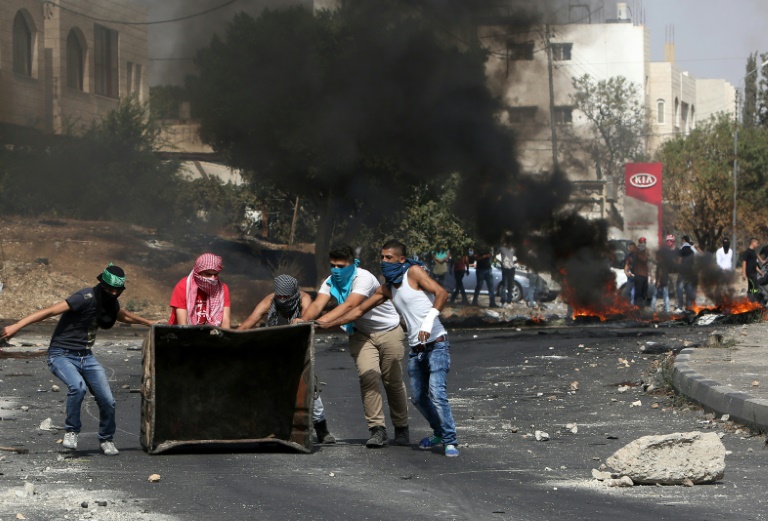 Prime Minister Benjamin Netanyahu vowed Monday that Israel would not bow to “knife terror” while four stabbings in Jerusalem gave no sign of Palestinian unrest slowing.

Frustrated Palestinian youths have defied president Mahmud Abbas as well as an Israeli crackdown by staging violent protests in annexed east Jerusalem and the occupied West Bank, while 18 stabbings have targeted Jews since October 3.

There have been warnings of the risk of a full-blown uprising, or Palestinian intifada.

The stabbings have killed two Israelis and wounded about 20, including a 13-year-old critically injured on Monday.

Referring to past uprisings, Netanyahu said Israel had overcome previous bombing campaigns and “knife terror will not defeat us now”.

But security forces have struggled to stop the stabbings, mostly committed by youths believed to be acting on their own.

In Monday’s first stabbing, an 18-year-old Palestinian from east Jerusalem attacked a policeman at an entrance to the Old City and was shot dead by officers.

The policeman’s protective vest stopped the knife and he was unharmed.

Later, a female attacker stabbed a policeman near the force’s headquarters in Jerusalem and was shot and wounded by the officer, police said.

In another attack, two Palestinians stabbed two Israelis in the east Jerusalem settlement of Pisgat Zeev, with one attacker, 17, killed and the other, 13, shot and seriously wounded.

The victims were both Jews, with a 13-year-old who was riding a bicycle critically wounded and a 25-year-old seriously hurt, police said.

After nightfall an Arab man on a bus entering Jerusalem stabbed an off-duty soldier and tried to grab his weapon, lightly wounding him before being shot dead by police.

Palestinian rights group Al-Haq accused Israel of “shooting to kill” Palestinian attackers when they are surrounded by armed security personnel and no longer pose a deadly threat.

“According to international law, lethal force may not be used except when one or more lives are in actual danger,” said Al-Haq director Shawan Jabarin.

The unrest has spread to the Gaza Strip, hit by three wars with Israel since 2008. Clashes along the border left nine Palestinians dead from Israeli fire on Friday and Saturday.

On Monday evening, dozens of Gazans broke through the border fence and briefly entered Israel before being pushed back by troops, Palestinian witnesses said.

Palestinian frustration has mounted with efforts towards statehood at a standstill and Israel’s occupation continuing, and a recent poll found a majority favouring an armed uprising in the absence of peace talks.

Funerals of Palestinians killed during unrest or while allegedly carrying out attacks — as well as videos of the shootings — have fed anger.

On Monday, children with plastic guns mixed among hundreds of others who carried the body of Ahmed Sharake, 13, during his funeral procession at the turbulent Jalazone refugee camp.

He was killed on Sunday during clashes in Ramallah.

Some 25 Palestinians have been killed amid the unrest, including alleged attackers.

Palestinians have thrown stones and firebombs at Israeli forces, who have responded with live fire, rubber bullets, tear gas and stun grenades.

The Red Crescent said Sunday that 1,021 Palestinians have been wounded by live fire and rubber bullets since October 3.

“Netanyahu wants to instigate a third intifada. He wants to avoid problems that he is facing in the political and diplomatic arena, where he has failed miserably,” Malki told AFP.

Netanyahu called on Abbas to stop what he called Palestinian incitement and to condemn attacks.

Both Netanyahu and Abbas have sought to avoid an escalation, but frustrated Palestinian youths have defied efforts to restore calm.

Israel also said Monday that YouTube had taken down Palestinian videos that the Jewish state considered to be “inciting murder”.

Videos of Palestinians stabbing Israelis or calling for such attacks as well as footage of protesters throwing stones at Israeli soldiers have been shared on the Internet, in addition to the shooting footage.