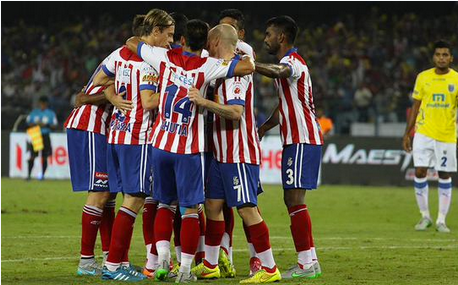 Inspired by the presence of Brazilian great Pele, defending champions Atletico de Kolkata climbed to the top of the table with a 2-1 win over last year’s runners-up Kerala Blasters in their first home match of the ISL here today.

Watched by the all time great Pele who had earlier met them at the team hotel, ATK packed a punch and scored through Arata Izumi (sixth) and Javier Lara (53rd).

Having missed a penalty in the ISL opener in Chennai, Lara was the key man for ATK as he stood out with his set-piece movements and was adjudged man-of-the-match.

Coached by former English international Peter Taylor, KBFC were unimpressive in most parts and showed some urgency in the later stages when Chris Dagnall (80th) pulled one back from a CK Vineeth header.

But there was a setback in store for the visitors who were reduced to 10 players in the 89th minute after Mehtab Hossain received his second yellow in front of his home crowd.

10-man KBFC intensified pressure through Dagnall who had a brilliant shot in the stoppage time but ATK keeper Juan Calatayud thwarted his effort.

ATK climbed to the top of the table with seven points from three matches ahead of FC Pune City (six).

Watched by Pele, the hosts were off to an attacking start and almost went ahead in the fifth minute but the crosspiece came in the way of a powerful Lara rightfooter.

But Lara was in the centre of attack in the following minute when he set up Iain Hume brilliantly from the midfield and the Canadian forward followed it up with a left footed shot on goal.

Kerala keeper Stephen Bywater came in the way but could not hold the ball which took the deflection and Arata was there to pounce on it slotting it into the top corner.

Arata, who had given the lead in their 1-1 draw in Goa, thus brought up his second goal of the season.

The all-English attack in Sanchez Watt and Chris Dagnall mainly remained immobile as it was mostly a one-way traffic for ATK who held the possession for most part of the match.