Home Sports India lose five in a row as Oman cruise to 3-0 victory... 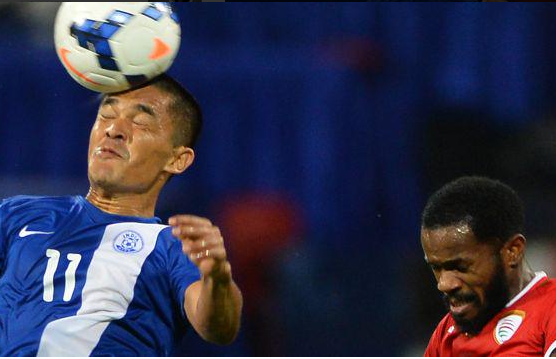 Indian football team’s abject humilation continued as they slumped to their fifth consecutive defeat in the 2018 FIFA World Cup qualifying round, losing 0-3 to Oman in an away game on Tuesday.

For the hosts, Ahmed Kano Mubarak scored in the 55th minute while Abdul Aziz Al Muqbali scored in the 67th and 85th minute to round off the tally. Oman had won the first leg encounter in Bengaluru 2-1.

India thus stay at the bottom of the heap having conceded as many as 12 goals in their five games, managing to score only thrice.

At the Sultan Qaboos sports Complex, the Indian team barely managed to hold fort during the first 45 minutes as it ended with Oman failing to break the deadlock.
However, the repeated raids and the relentless pressure on the defence meant that scoring the first goal was only a matter of time.

Stephen Constantine’s boys were defending with eight to nine men in their defensive third at one point of time.

With the two wide men Rino Anto in the right and Narayan Das in the left having a torrid time in countering the fast wing play, the pressure was more on the centre backs Arnab Mondal and Sandesh Jhingan, who at times just cleared the balls to keep Oman attackers at bay.

Anto especially was an embarrassment considering he had just landed a crore plus deal in the Indian Super League with Atletico de Kolkata.

Finally, the deadlock was broken in the 55th minute through a set-piece movement. Iran got a free-kick on the right wing. It was a left-footed inswinging floater inside the box that found Anto napping and goalkeeper Gurpreet Sandhu missed his footing as he slipped. The left winger diverted the ball towards an unmarked Mubarak with a diving header.

All that Mubarak had to do was to tap it in, much to delight of the partisan crowd.

Once they got the goal, Oman were more assertive as their No 10 raced down the left wing beating Anto and Bikash Jairu before essaying a cross which Jhingan should have cleared.

Instead he bungled and the ball fell to Abdul, who gleefully did the spadework past a helpless Gurpreet to make it 2-0.

The third goal was straight out of the drawing board set-piece movement where India’s back-three tried to create an off-side trap and were beaten hollow by Abdul. It was another inswinging floater from the left wing which saw Abdul execute a free header.

India did not have a single positive chance save a couple of half chances when Chhetri tried a left footer that went well over horizontal and once Jeje was freed but a timely tackle by the central defender foiled the move at the top of the 18-yard box.