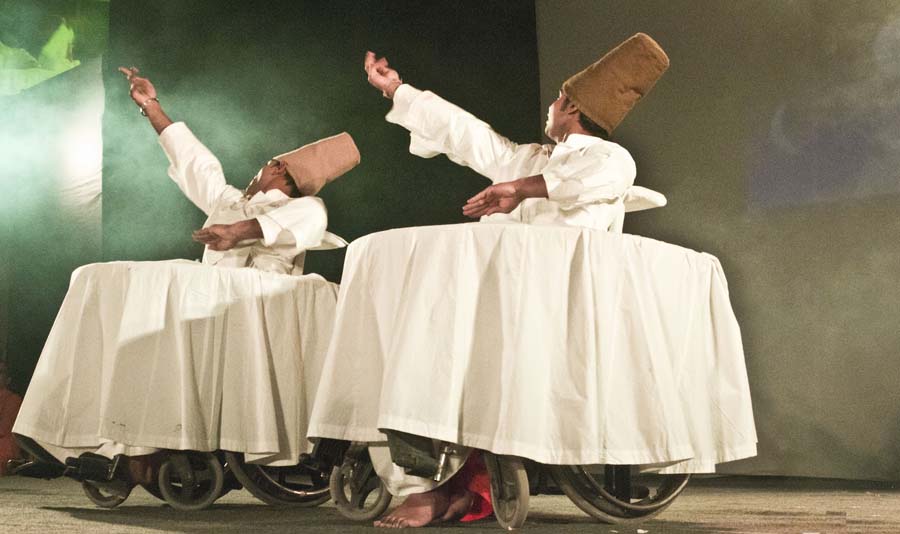 A group of differently-abled artists, suffering from visual impairment to autism, will soon form a mega show team in Kerala, an initiative claimed to be the first in the country.

Titled ‘Fly Wings’, the art-cum-cultural group will have talented performers specialising in various art forms, but suffering from five kinds of disabilities.

Kochi-based ‘Prathyasha Foundation’, an NGO which has been working for years for the uplift of differently-abled people and promoting their potential and talent, is floating the art-cum-cultural group.

Chief Minister Oommen Chandy will inaugurate the unique initiative at a function in Kochi on November 29, its founder and chairman Simon George said.

“Art groups of differently-abled persons is not new in India. But in most cases, it will either be a music group of visually challenged or a dance band of wheelchair-bounds. But our concept is entirely different,” Simon, who himself is physically challenged said.

“Our members are those suffering from five kinds of impairments. But all of them are exceptionally talented singers, dancers and comedians,” he said.

As many as 45 performers will be in the ‘Fly Wings’ team, which has already begun receiving bookings from various parts of the state.

Award-winning visually impaired playback singer Vaikom Vijayalakshmi, who is known for her hit numbers in movies like ‘Celluloid’ and ‘Nadan’, will be a major attraction of the group, he said.

Rakesh Rajnikanth, a singer suffering from blindness and autism, Sophia M George, a hearing and speech impaired cinematic dancer, Kayamkulam Babu, a classical and semi-classical singer suffering from visual impairment and physically challenged dancer Vandana V R, who has only one leg, would be some of the star performers of the group.

Comedy skit of a group of pygmy artists would also be part of the performance of the mega show team, he said, adding a grand mega show is also planned as part of the inaugural ceremony.

A documentary titled ‘Barrier Free India’, envisaged to create awareness on the need of creating a disabled friendly environment in society, would be released by home minister Ramesh Chennithala during the inaugural function, Simon added.